Government will have its presidential house in Santiago 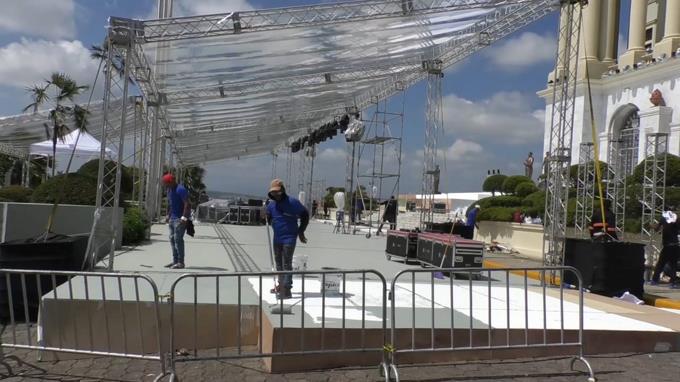 The stage of the Monuments to the Heroes of the Restoration where Abinader will speak.

Santiago, DR
The governor of the province of Santiago, Rosa Santos, announced all the details of the visit of President Luis Abinader. For the first time, the latter will address the country from the heart of the city to take stock of his two years of the presidential administration.

The event will take place on the steps of the Monument to the Heroes of the Restoration. There, the President is scheduled to begin his speech at 7:00 pm, from a tent installed with a transparent roof, which will also welcome guests from the provinces of Duarte, Espaillat, Valverde, La Vega, and the host city, Santiago.

The representative of the Executive Power in Santiago, Rosa Santos, said that a particular area with giant screens would be set up in the parking lot on the right side of the Monument so that the citizens of Santiago and the region who cannot be on the main stage can participate in the event and watch the President during his speech.

Regarding the presidential house in Santiago, Rosa Santos said that the residence, which will be “the presidential palace of Santiago,” where the head of state will stay when he is in the Cibao, from where he will dispatch his commitments, is already in the process of delivery.

“Thanks to God, we already have the house; we are in the process of acquiring it, because it is a private house soon the works of adaptation and renovation of the structure will begin,” explained the representative of the Government in Santiago.

Santos, although she did not give details of the location of the residence, she did say that it would be located in the downtown area of the city. However, he insisted that “it is already a fact.”