Dominican surfer Brandon Sanford Viñas: “My love for the sea is stronger than ever” 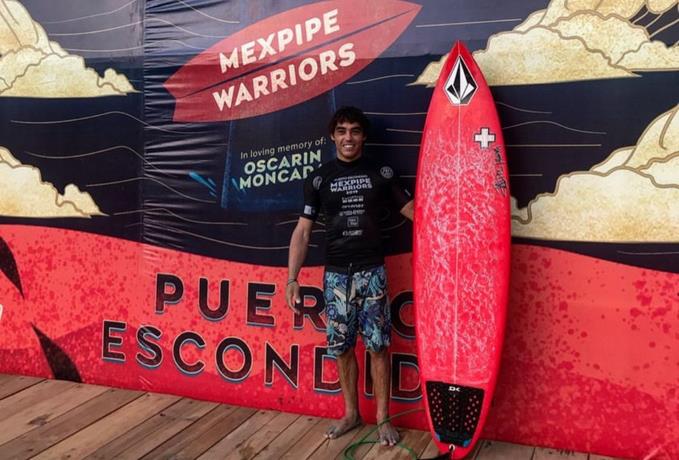 Santo Domingo, DR
After dedicating part of his life being a servant of tourism as a guide for Dominicans and foreigners visiting Cabarete (municipal district of the municipality of Sosua, Puerto Plata) and its beautiful beaches for the first time, Dominican surfer Brandon Sanford Viñas has decided to pursue his dream: to be one of the best surfers of tubular and big waves.

At 33 years of age, as a country representative, he has been invited to embark on one of the most important water sports events worldwide, the Mexpipe Warriors 2022, and he is determined to succeed.

Speaking to Listin Diario, Sanford Viñas indicated that his interest and love for surfing were born when he was just a child. The young athlete grew up watching from his house, which had the “Encuentro Beach” behind it, neighbors and local boys older than him surfing. He watched them enough, so much so that, when he was only six years old, he was already inside the sea, catching waves.

“My mom saw that I really liked this water sport and on a trip to Puerto Rico she gave me my first surfboard. Little by little I got more into the waves and it ended up being my passion. That was my first love and to this day it still is,” said Sanford Viñas with great enthusiasm and excitement.

After recalling the beginnings of his encounter with the sea, he commented that many things have happened.

He began to take surfing more seriously, and at the age of 14, he won his first international contest in Puerto Rico. Years later, he became Sub-junior Latin American Champion (2004), then Open for six consecutive years, and placed third in the Master of the Ocean event, ahead of strong competitors from around the world.

“I don’t have enough fingers and toes to count all the events I’ve attended, small and large. I’ve gone 30 times to different events around the world to represent the country. Mexico, Costa Rica, Panama, California, Florida, Brazil, Nicaragua, Peru, Ecuador”, the athlete points out.

He is interested in tourism in the Dominican Republic

After some time competing, the young man stopped and felt that there was a need for a service that would provide a fun experience for Dominicans and foreigners in the mecca of water sports in the country, Cabarete.

Sanford becomes a tour guide and founded a company called Dominican Surf Trips to share the gift of the beauty of surfing in the Dominican Republic.

“This country…many people who even live here don’t know it, but it’s a treasure in terms of the water sports and beaches we have,” the surfer points out.

Under the slogan “Somewhere in DR,” in Spanish, “en alguna parte de RD,” he would take tourists to get to know secret and hidden beaches where surfing was practiced.

“Surfing is very selfish, it’s not a group sport, you always want to hide your favorite beach and your favorite wave so you can enjoy yourself. If there are many people trying to catch that wave, the fun is not the same (…) I used to take my clients to very nice, secret beaches,” commented Sanford Viñas.

“My love of the sea is stronger than ever.”

Sanford is at a stage in his life where he is focused on his dream and wants to make it a reality. He emphasized that he feels an innate commitment to the youth of the Dominican Republic.

“The generations coming behind me deserve someone who will inspire and motivate them. And right now, I feel that I am ready to give them good motivation and inspiration. That’s why my love for the sea is stronger than ever,” the ‘Foil Surfing’ lover expressed.

For Sanford Viñas, surfing is his life, and he describes the sport as a lifestyle. “The moment you grab the board and catch that wave, you free yourself from many things in life,” he said.

Going for the Mexpipe Warriors 2022

Viñas’ true passion has always been to chase the biggest waves possible.

The Mexipipe Warrior event is an activity that takes place in the silver Puerto Escondido, located in Mexico, one of the strongest wave beaches, and will be held in September 2022. There, tube surfers from around the world will be summoned.

Sanford Viñas obtained a place on the event’s guest list that honors the legendary Mexican surfer Oscar Moncada. The young competitor indicated that he feels proud to be representing the country.

“It is an honor to have that title. Not just anyone can make it and it’s an invitation I have. I would love to win,” he added.

“I am swimming, doing exercises, especially breathing exercises. I go to a beach and dive with a rock and hold my breath as far as I can, I do this to simulate a crash in a big wave,” he explained.

“I prepare my mind so that the little devil doesn’t tell me “that wave is too big,” “I don’t think you can do it,” building a strong mind,” he added.