Claude Joseph and 12 gang leaders banned from entering the country 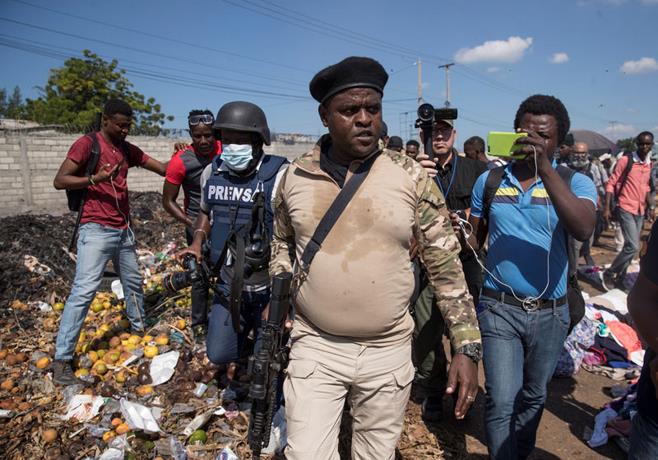 Jimmy Cherizier (Barbecue), leader of the 400 mawozo armed gang, has been prevented from entering the country by order of President Luis Abinader. file/ld

Through communication 22018 and addressed to Venancio Alcántara Valdez, director general of Migration, it is based, in addition to the powers conferred by the Constitution, on the application of Article 15 of Law 285-04, on Migration and its implementing regulations, which allow preventing the entry into the national territory of those foreigners who have criminal records or who, in the opinion of the competent authorities, constitute some threat against national security and the interests of the Republic and at the request of the corresponding defense and security agencies.

“I, Luis Abinader, constitutional president of the Dominican Republic, by virtue of the attributions conferred to me by literal b, numeral 1, of article 128 of the Constitution of the Republic dictate the following instruction”, says the president when he requests to prevent the entry to the national territory of Claude Joseph, Jimmy Cherizier alias Barbecue; Innocent Vitel’Homme, known as Vitelom – Gang Vitelom (Torcelle); Destina Renel alias Ti Lapli – Gang Grand Ravine; Wilson Joseph known as Lanmo San Jou, of the 400 Mawozo gangs.

Former Prime Minister Joseph has become a critic of the Dominican government and the current Haitian authorities.

Last June, Joseph branded Abinader a “hypocrite” after he claimed that the Dominican Republic did not agree to regularize immigrants from the neighboring country during the meetings of the IX Summit of the Americas. “This is a man who does not fulfill his promise at the national level on many issues but thinks he can use Haiti as his last resort to please the ultra-nationalists in his country and win votes,” he said in a series of tweets.

Likewise, and through that social network, last August 26, the former prime minister called for a general mobilization against Prime Minister Ariel Henry, whom he criticized for not acting against armed gangs, crimes, and kidnappings in that nation. Criminal gangs operating in Haiti have spread to the north, northwest, and northwest of that country, near and on routes to the Dominican border.

Many have harbored suspicions that several members of these gangs engaged in kidnapping, arms trafficking, drugs, robberies, and killings, among other crimes, in some parts of the Dominican Republic.

According to the Haitian police, the gangs are also allegedly made up of Dominicans.

“There is a legion of Dominicans who are an integral part of the armed gangs currently operating in Haiti,” said the police statement after the arrest of Molaï Ortiz Mieses. They allegedly formed part of one of the gangs.
On June 24, the Dominican government denied these statements and admitted that it had
identified the prominent leaders of the gangs operating in Haiti.

“Haiti does not have the technology or reliable records to obtain accurate information on the identity of the members of the different criminal gangs… Our country, on the other hand, has such a registry.”

Keep up the pressure! Hope the ban can be enforced.

Enforcement can be very questionable. Pressure increases the cost of a pass ticket.

The ability to move weapons between Dominican Republic and Haiti is much simpler now that the border wall is being constructed.
History has a way of always repeating itself and the best military did not stop Haitians from winning their freedom.

Go ahead and try ,,who’s stopping them ? Haitians outmatched and outnumber us in that time line , and got their azz beat by Dominicans. What a whack history, nothing to show in todays world, ..

We are stocked with the 300 years Haitian crisis. I blame the French for starting this mess in the seventeen century in our island.