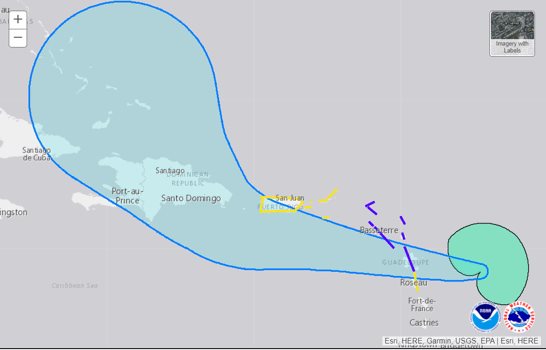 Fiona is moving west at about 15 miles per hour. ( US NATIONAL HURRICANE CENTER )

Fiona’s heavy rains will hit the Dominican Republic on Sunday.

The previous weather alert issued yesterday afternoon and evening included the area from La Romana to Cabo Engaño and Cabo Engaño to Cabrera.

An early weather warning means that within 72 hours or less, one or two of the three effects of a tropical cyclone are possible in the areas under alert, such as heavy rains, storm force winds, and abnormal surf.

Alerts
The Emergency Operations Center (COE) issued an early green alert for four provinces given the possible incidence of tropical storm Fiona in the Dominican territory.

According to Onamet, slight changes in its intensity are forecast for the next few days as it approaches the Dominican Republic.

Meanwhile, the U.S. National Hurricane Center reported in its Friday bulletin that tropical storm conditions are expected in the Leeward Islands within the warning area for tonight.

Heavy rainfall from Fiona will reach the Leeward Islands tonight, extending to the British and U.S. Virgin Islands and Puerto Rico on Saturday, reaching the Dominican Republic on Sunday and the Turks and Caicos Islands on Monday night or Tuesday.

The report indicates that Fiona is expected to move near the island of Hispaniola early next week.

This Friday
The Onamet indicated that this Friday dawns with mostly cloudy skies over locations in the southeast, northeast, and the Central Cordillera, such as in La Altagracia, El Seibo, La Romana, Hato Mayor, Monte Plata, San Pedro de Macorís, Santo Domingo, Samaná, Duarte, Sánchez Ramírez, among others, where the occurrence of local showers, isolated thundershowers and occasional gusts of wind, during the morning and evening hours, a product of the incidence of a trough in the high levels of the troposphere, is also expected.

On the Atlantic Coast, the Onamet recommended that operators of small and fragile boats navigate with caution without venturing out to sea from Cabo Engaño (La Altagracia) to Punta Mangles (Miches) due to abnormal swells.