80% of the damaged circuits in Gazcue are repaired by Edeeste 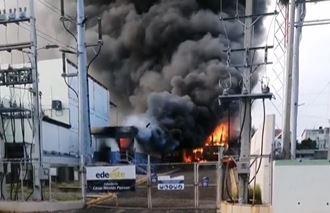 The César Nicolás Penson Substation’s transformer number two caught fire yesterday, affecting more than 80% of the circuits it served in the National District, according to a report this week from the Eastern Electricity Distribution Company (Edeeste). Andrés Portes, general manager of Edeeste, stated in a statement that the rapid action plan’s implementation was what allowed the situation to improve.

He claimed that the strategy called for the transfer of goods to the Southern Electricity Distribution Company’s circuits (Edesur Dominicana). According to Portes, the impacted region includes the Gazcue, Don Bosco, Independencia avenue, hotels near the boardwalk, and the National Palace. “We were able to transfer them, reaching about 2:00 this Tuesday morning at around 80% of the load of the entire affected area,” Portes said.

The official clarified that because there were alternative service options available, the Government House never experienced power outages. In the initial stage of the contingent action plan, they were also successful in restoring power to San Carlos and Villa Juana.

“The second phase continued with the lifting of the events, and immediately after, we intended to begin the clearing of the rubble and get ready each of the bodies through which we are going to renovate the facility today,” he added.