Drivers drive like crazy; but carriers claim they apply controls and educate them 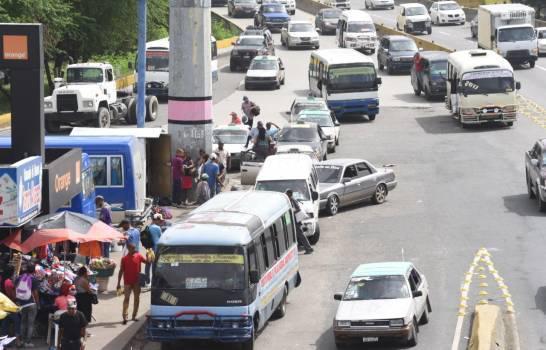 The disorder of public passenger transport has been a headache for decades. ( EXTERNAL SOURCE )

Despite the frequent recklessness that public transport drivers are seen committing every day and at all times on different roads of the country, the foremost transport leaders ensure that they apply and continue to carry out defensive driving training courses.

And yet, on the roads, you see something else. Like the national disgrace in which the bus accident of the Suero Bus occurred in Bávaro, where five tourists died, and dozens were injured. The Public Ministry assures its file that the driver was driving under the influence of cocaine, “without caution, in a careless, reckless, reckless and imprudent manner.” Moreover, they consider that “he was speeding and that when he turned right, he did not reduce speed.” In addition, a toxicology test presented in the request for coercive measure sustains that the man tested positive for cocaine.

It also added the numerous infractions that they commit permanently, such as red crossings, stops in the middle of the road to pick up or dismount passengers, and cuts to cross from one lane to another, blocking crosswalks. In addition to the aggressive attitudes they demonstrate daily. All this gives the impression that they are not afraid of consequences and do not abide by traffic laws.

However, the president of the National Confederation of Transportation (CONATRA), Antonio Marte, affirms that the drivers of this union are oriented and subjected to various tests, which they must pass to be able to work there.

“Our case is that our drivers are undergoing anti-doping tests, taking their blood pressure, diabetes tests, and all these, but it is not so easy because of the cost, so the insurance, especially the anti-doping test, does not cover it,” said Antonio Marte.

NATIONAL
Regarding road safety education, he said that their affiliates constantly receive courses on defensive driving from technicians who work for them and training institutions such as the Technical Institute of Professional Training (Infotep), which help them perform better when transporting passengers.

“Road education is essential because the life of human beings is paramount, so people do not see that,” he says about transportation centers that do not apply such measures for various reasons.

While the president of the Central Movimiento Choferil del Transporte (Mochotran), Alfredo Pulinario (Cambita), says that his drivers receive training from technicians of the National Institute of Transit and Land Transportation (Intrant).

“It has been very successful that the driver has to go through a school, because in this course or in this defensive driving training they are given everything they need and it is explained to them that a driver while driving cannot talk on the phone, consume alcoholic beverages or any substance,” said Cambita, indicating that his members are followed up.

They maintain that accidents will always happen. Still, in the case of Mochotran, they have been minimal despite operating more than 168 routes throughout the country because, according to him, they keep orienting them, and sanctions are applied in case faults are detected.

Both businessmen agreed that justice should be left to apply the corresponding sanctions against Franklin Nin Pérez, the bus driver in which five tourists died on the 6th of this month when it overturned in the Bulevar Turístico del Este in Bávaro.

In this sense, they rejected that transport groups of the Eastern zone of the country carried out demonstrations in protest because the Special Peace Court of Transit of the Judicial District of La Altagracia dictated a year of preventive imprisonment against Nin Perez as a measure of coercion against him.

The file also accuses the accused of driving under the influence of cocaine, without caution, in a careless, reckless, and imprudent manner.

After learning of the imposition of the coercive measure, the Sindicato de Choferes de Transporte Turístico de la Región Este (Sichotrature) held a vigil at the site of the accident.

Tomacito Reyes, secretary general of Sichotrature, proposed that the trips to Saona Island this Saturday and Sunday, where the bus was headed, be suspended. However, the measure was not adopted.

There should be SEVERE penalties for reckless driving like driving under the influence, speeding, drag racing, etc. Reckless drivers should go to jail for killing or injuring a person and they should loose driving privileges for life.

Mad truck drivers, bus drivers, taxi and motorcyclist all over this country use roadways like their private RACEWAY and they should be ashamed.

Malecon of Santo Domingo should be the pride of the capital. Instead it is treacherous monster truck SPEEDWAY. Dominicans and tourists alike are afraid to sit along the Malecon because the next speeding truck or bus could kill their loved one next.

It really is a sad state of affairs.