Deaths and infections by cholera overwhelm Haiti amid crisis and violence 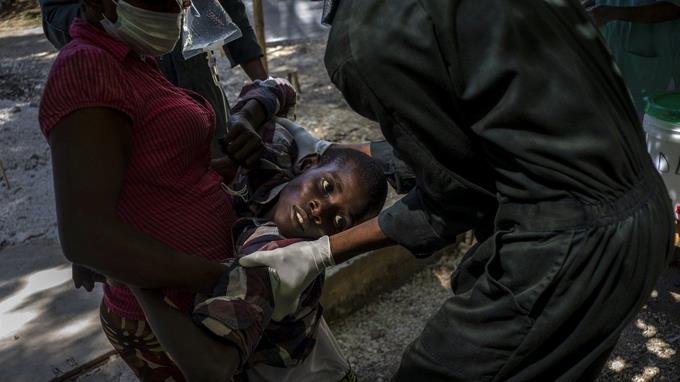 Port-au-Prince, Haiti
The sun was beating down on Stanley Joliva as medical staff at an open-air clinic in Haiti swarmed around him, pumping air into his lungs and giving him chest compressions until he died.

Nearby, his mother watched the scene.

Less than an hour later, the body of her 22-year-old son lay on the floor wrapped in a white plastic bag with the date of his death scrawled on top. He joined dozens of Haitians who have died from cholera amid a rapidly spreading outbreak that is straining the resources of nongovernmental organizations and hospitals in a country where fuel, water, and other basic supplies are increasingly scarce.

Sweat beaded on the foreheads of workers at a Médecins Sans Frontières (MSF) treatment center in the capital Port-au-Prince, which receives about 100 new patients every day and where at least 20 people have died. Families were still arriving this week with their loved ones, sometimes dragging their limp bodies into the crowded clinic where the smell of garbage filled the air.

Dozens of patients sat in white buckets or lay on stretchers as intravenous lines connected them to bags of rehydration fluids glistening in the sun. So far this month, MSF has treated about 1,800 patients at its four centers in Port-au-Prince.

Across the country, many patients are dying because they say they can’t get to a hospital in time, according to health authorities. The spike in gang violence means people can’t safely leave their communities, and the lack of fuel suspended public transportation and shut down gas stations and other key businesses, such as water utilities.

Enfant sat next to his son’s body as he recalled how Joliva told him she was feeling ill earlier in the week. She had warned him and his two other sons not to bathe or wash their clothes in the sewage-contaminated water of a stream near their neighborhood, the only source of water for hundreds of people in the area.

He insisted that they buy water for washing clothes and add chlorine if they were going to drink it. As Joliva got worse, Enfant tried to care for him alone.

Cholera is a bacterium that sickens those who ingest contaminated water or food and can cause severe vomiting, diarrhea, and, in some cases, death.

Haiti’s first major contact with cholera occurred more than a decade ago, when U.N. peacekeepers carried the bacteria into the country’s largest river through sewage from their base. Nearly 10,000 people died and thousands more became ill.

Over time, cases declined to the point where the World Health Organization was expected to declare the country free of the disease this year.

But on October 2, Haitian authorities announced that cholera had returned.

At least 40 deaths and 1,700 suspected cases have been reported, but authorities believe the number is much higher, especially in the crowded and unsanitary slums and government shelters where thousands of Haitians live.

Compounding the situation, the lack of fuel and water began to be felt last month when one of the country’s most powerful gangs surrounded a key fuel plant and demanded the resignation of the prime minister, Ariel Henry. Gas stations and businesses such as water companies have closed, forcing increasing numbers of people to resort to untreated water.

Shela Jeune, a 21-year-old hot dog vendor whose two-year-old son has cholera, said she buys small bags of water for her family, but does not know if it is treated or not. She took the boy to the hospital, where he continues to receive IV fluids.

“Everything I feed him, he vomits,” she noted.

Jeune was one of the dozens of mothers seeking treatment for their children one recent morning.

The story of Lauriol Chantal, 43, was similar. Her 15-year-old son was vomiting right after he finished eating, prompting her to take him to a care center.

While there, the young man, Alexandro François, indicated to her that he was hot.

She agreed but suddenly collapsed in his arms. The staff rushed to her aid.

According to UNICEF, half of Haiti’s cholera cases are among children under the age of 14, and officials warned that increasing cases of severe malnutrition make children more vulnerable to the disease.

Poverty has contributed to the deteriorating situation.

“When you can’t get clean water through the tap in your own house, when you don’t have soap and water purification tablets and you don’t have access to sanitation, you may not survive cholera and other waterborne diseases,” said Bruno Maes, UNICEF’s representative in Haiti.

Perpety Juste, a 62-year-old grandmother, noted that one of her three grandchildren fell ill this week as she worried that her situation may have led to contagion.

Juste, who lives with her husband, five children, and three grandchildren, worked as a house cleaner until the owners left the country.

The growing demand for aid is draining the memories of MSF and those trying to care for patients with limited fuel.

“It’s a nightmare for the population and also for us,” said Jean-Marc Biquet, the NGO’s project coordinator. “We have fuel for two more weeks.”

Life has come to a standstill for many Haitians like Enfant, who mourns the death of his son. She wants to bury him in his hometown of Les Cayes in the south of the country but cannot afford the 55,000 gourdes ($430) it would cost to move him.

Enfant fell silent and stared into the distance as she continued to sit by her son’s body, too shaken to get up, she said.