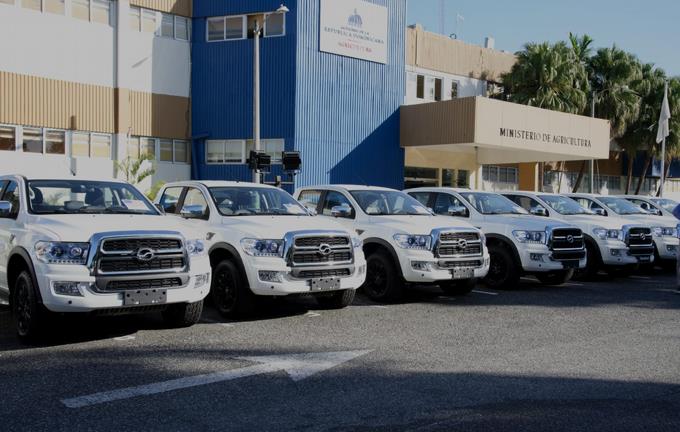 Through the International Regional Organization for Agricultural Health (OIRSA), the Embassy of the United States donated eight trucks to the Ministry of Agriculture of the Dominican Republic this Monday, in support of the fight against African Swine Fever (ASF). To prevent the spread of the disease, the vehicles will be used for field operations such as cleaning, disinfection, and surveillance. The charge d’affaires of the US embassy, Robert Thomas, emphasized his government’s extensive cooperation since the discovery of ASF last year.

The diplomat assured that “the United States wants to see the Dominican Republic prosper and succeed and that means working hand in hand with the Dominican authorities to eradicate African swine fever to guarantee the continued success and prosperity of the hog production sector.” He added that “today’s donation is just another example of our sustained and ongoing support to the Dominican Republic in the management and mitigation of African swine fever.” The Minister of Agriculture pointed out that “since the activation of the ASF Incidence Command System, we have kept this dangerous disease under control to protect the Dominican swine population and with the firm decision of President Abinader each producer affected by slaughtering their pigs we compensate at a fair price so that you can recover and maintain your economy”.

He indicated that it is a joint work in addition to international organizations, the Ministry of Agriculture, the General Directorate of Livestock, Digega el Bagrícola and pig producers. This delivery, valued at US$380,000, is part of the more than US$17 million that the US government has contributed to the country since July 2021 in vehicles, equipment, and technical assistance to eradicate this disease and protect the Dominican people from its impact on the national economy and food security. The total figure also includes US$5.2 million to compensate producers who lost their pigs due to the epidemic.

More gifts to ohr theif president, selling our country out to America and China.

This is a good gift for prevention and control of the swine flu and less costly than having to kill off and replace all the pigs.

Although the trucks look like Toyotas, take a close look at the emblem on the grille. Chinese trucks. I bet that will go over well with Americans!