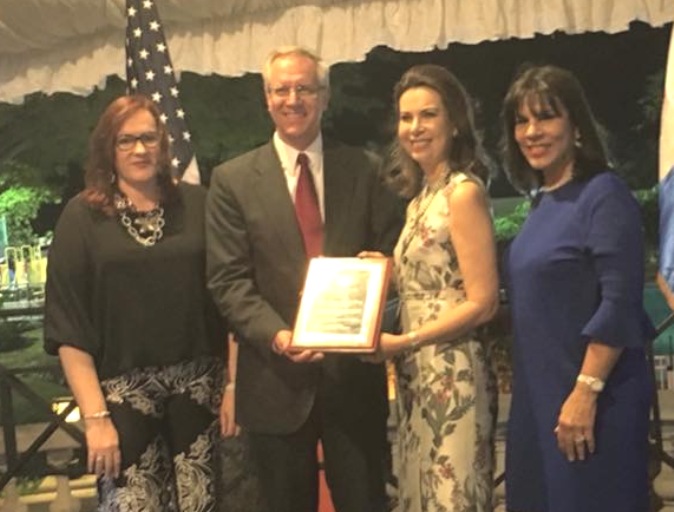 Santo Domingo.- During its annual reception in honor of International Women’s Day, the Embassy of the United States in Santo Domingo recognized Soraya Checo de Álvarez as the Outstanding Woman 2018, for her hard work and valuable contributions to the country through of the integral teaching of children and young people in the Educational and Community Center of Santa María City.

During his speech, Mr. Robert Copley, Chargé d’Affaires, a.i. of the Embassy, ​​told the guests that “there are many examples of Dominican women who inspire others to have the courage to act on behalf of the interests of vulnerable populations or take action to make the world a better place” and within them, stressed the work of Mrs. Checo to offer young people with limited resources the possibility of a bright and prosperous future.

Soraya Checo received the recognition on behalf of all the people who have collaborated with the Santa Maria City Educational and Community Center, and thanked the Embassy of the United States for the distinction, while expressing that “we can all work to have a different world, less exclusionary and the change must begin with oneself I am not saying this out of naivety, let it be clear, everyone, to be truly happy, we need to make the effort to deprecate prejudices and in some way help others. ”

Mr. Copley presented the recognition plaque to Soraya Checo de Álvarez in the presence of other women leaders in different professional fields who also attended the Embassy’s residence to share in the traditional reception.

Soraya Checo de Álvarez became the first winner of Outstanding Women, thanks to the selection of a panel of women graduates of the Fulbright and International Visitor Leadership (IVLP) programs of the United States Department of State, who evaluated the nominations received and considered it worthy of recognition for their commitment to education and development in low-income communities in Santiago.

About Recognition of Outstanding Woman

It is part of the campaign of the same name, in which through the social networks of the diplomatic mission are told the stories of Dominican women who are fighting tirelessly for the improvement of their communities, generating a positive impact and making significant contributions within its sectors. For more information, you can search the # MujerDetacada2018 and #DestacadasRD networks.