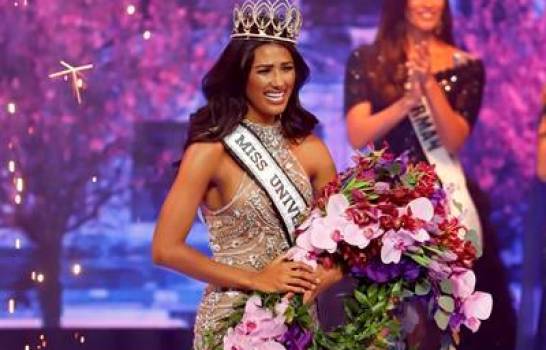 Santo Domingo.- Michelle Colón, 21, from the municipality of Loíza and of Dominican roots, was selected Miss Universe Puerto Rico 2021 this Thursday, with which she will represent the Caribbean island in the Miss Universe 2021 pageant that will celebrate its 70th edition in December this year in Israel.

Colón, a statuesque brunette, convinced the jury as the most beautiful woman in Puerto Rico in an act televised throughout the island from the Centro de Bellas Artes de Santurce, in San Juan.

The young woman, a native of Loíza, on the north coast of the island where the population of African origin abounds, also obtained the award of ‘Woman of Courage’ granted by L’Oréal Paris to reward philanthropy.

Half puerto ricans have dominicana roots even if they denied it

Most Dominicans are Black even if they deny it

Definitely someone who has never been to Jarabacoa or Santiago.

What does that have to do with the price of tea in China? That was a very ignorant and racist comment!!! If you don’t have anything intelligent to say don’t say anything at all!!!

We don’t deny our ancestors but we were conquered by Spaniards as well as Puerto Rican So I’m Dominican and also have Puerto Rican roots and whats the problem . That we have blacks in us so whats wrong with that , im not ashamed. What about you.?

Enterese… most dominican rae mulatos, mixt of africans and white. Only 16% are blacks and 11% white

I don’t believe what you are saying is true. Puerto Ricans have their own roots just like Dominicans have theirs. To represent Puerto Rico she should be born in Puerto Rico. That she may have ancestors from the Dominican Republic doesn’t make her Dominican. Plus it says she represented the town of Loiza so that tells me is where she was born and raised. The bottom line is that she is and will be representing Puerto Rico 🇵🇷 Good luck to her and best wishes!!

The controversy of identity continues. The Caribbean has a wide and diverse cultural mix-we do not need to get specific on it either. The young lady was raised in Loiza, but that is insufficient for “the purist crowd” ; these are the ones who question accuracy, ancestry and history. A case in point to set the controversy at rest: Our 1st Ms. Universe was Marisol Malaret. Re: Wikepedia, French surnames in Puerto Rico. Malaret is of French origin! The next time you deal with those who do not follow our history, please remember we know better. I have your back on this! Peace.

if you add that historically we’ve been moving back and forth between PR, DR, Cuba, etc, don’t see what’s surprising. many boricuas settled on the east coast of the DR at the end of the 1800’s one of them was my great-grandfather, and so on

Noone is saying she is Dominican, she is where she was born and raised she Puerto Rican, but she is also half Dominican by her mother.

Her mother is Dominicana, that’s it

Her dad is Puerto Rican and was Born in Bayamon,Puerto Rico also was raised there. Her mom is Dominican and she even talk like a Puerto Rican she has been leaving there for so long. Michelle is more Puerto Rican than anything else. 🥴💯

wrong!!! her father is Puertorrican, Her mother is Dominican!

Puerto Ricans are a mixture of Taino Native Indians, Spaniards and African. Let’s keep it real!

Boriucas from the island are literally natives some are mestizo Spanish and native.

Boriucas from the island are literally natives. some are probably mestizo Spanish and native African DNA.

Puerto Ricans are a mixture of mainly European, Taíno Indian and African. During the Spanish conquests, many Arab, Jewish and Asian immigrants also arrived. And since we have been American Citizens more than a hundred years ago, Americans have also been integrated into our society and culture. So, your point is totally wrong. We are very diverse.

Puerto Ricans Do Not seek refuge in DR and yes we are in the same blood lineage but Dominican today needs first embrace Haiti before they put Her Domican roots first it’s pathetic how u go to P.R. to escape DR yet u refuse to admit that P.R. helps u constantly

That is the most stupid and racist comments that I heard in my life. Like half of the population in PR don’t live in USA and get the benefits that comes from them, but you are not American you are Puerto Rican!

Your an —!! Miss Puerto Rico is half Dominican. Tho she was born in PR. She will always be half Dominican don’t get it twisted. I’m myself is 🇵🇷 & 🇩🇴 born in 🇵🇷 raised in NY. I always say that I’m both!!!

Otro baboso hablando caca! Dominicans have nothing to envy Puerto Rico!!! What Island is the #1 in the Caribbean? PR is part of the US and you’re still poor, the US don’t care bout you!!! DR was the first Island in the New World, who learned from who? And once again you lost tonight!! The judges saw right through her fakeness she over acted and was not authentic.

If she was born in Puerto Rico than that’s what you need to write down.

What difference does it matters concern her heritage and where she

It’s a discussion…are you triggered?

I think her grandmother from her mother’s side is Dominican…her parents are both puertoricans and she was born and raised in Puerto Rico.

NOT TRUE, she is pure Puerto Rican. Why would you say otherwise?

Yes she does not come from Puerto Rican parents so if she have Dominican roots that is so true.

Her father is from Puerto Rico . She is mix

Everybody need to relax, come on, the majority in this world are mix and why does it matter if a person is mix? I have y’all all in my family and I’m so happy and bless.🙏🏼🙏🏼

Some Puerto Ricans are quick to claim Luis Miguel because he was born in Puerto Rican waters while his mother was on a cruise. I believe that says it all. One thing I can say is Puerto Rico is celebrated for it’s hospitable nature. So, if you can claim Luis Miguel (who says he is Mexican) the same applies to this beautiful woman!!! Stop Hating!!!!!

What Puerto Ricans claim Luis Miguel as Puerto Rican? Got any first and last names? A magazine article dies not speak for real live Puerto Ricans…never heard that come out of anybody I know mouth….i live here.

In Puerto Rico no one, absolutely no one claims Luis Miguel. Here we have too many world-class artists who are proud to represent the island on whatever stage they step on. What you say is a big #Fakenews

The only thing this article and some of the comments posted prove is that in 2021 we still have a whole lot of racist and ignorant uneducated people in this world who have obviously been living under a rock or in a bubble for the past 60 years or have been reactivated by the last President of the USA. Who woke up every racist that ever had an opinion on the subject. People who have not seen or care to see how much blood and hatred is generated by their ignorance. They should all be put on one of Jeff Bazos’ rockets and sent to live in outer space where their comments and ignorance can not be heard and can never cause pain and suffering or bloodshed.

What is WRONG with YOU , people??!! She’s BEAUTIFUL, talented and of twice as much virtues if she has both cultural roots!! I was born and raised by Dominican parents and proud to be!! STOP the racist comments cause we are NOT like most americans!!! It’s what sets us apart… Love

So WHAT if she’s both. I’m born Puetoriquen and my parents Dominican. Tall ,beautifully sculpted and super intelligent. But most of al not racist. Shame on you for putting emphasis on such stupid topics. It’s the lady that counts HATERS!

Who cares where her parents are from. She was born in Puerto Rico and is representing Puerto Rico. And she choose’s to be known as Puerto Rican. Stop the hate people! Really, people cross borders and give up their nationality every day so what’s the fussing about?

People she is representing Puerto Rico! That’s it! Stop the hate! How many people cross the border every day wanting to change their roots so who cares where here roots, parents, or whatever else you may think. Maybe she’s from Venice. She chose Puerto Rico period……

In a general opinión i believe that puerto ricans do not Want this candidate to win the Miss universo peagent competition. . Because Puertoricans prefer a puertorrican female with puertorrican roots.

She is not 100% Puerto Rican therefore you can’t say she is Puerto Rican. She it’s not that pretty as in now days they are selected based on politics.