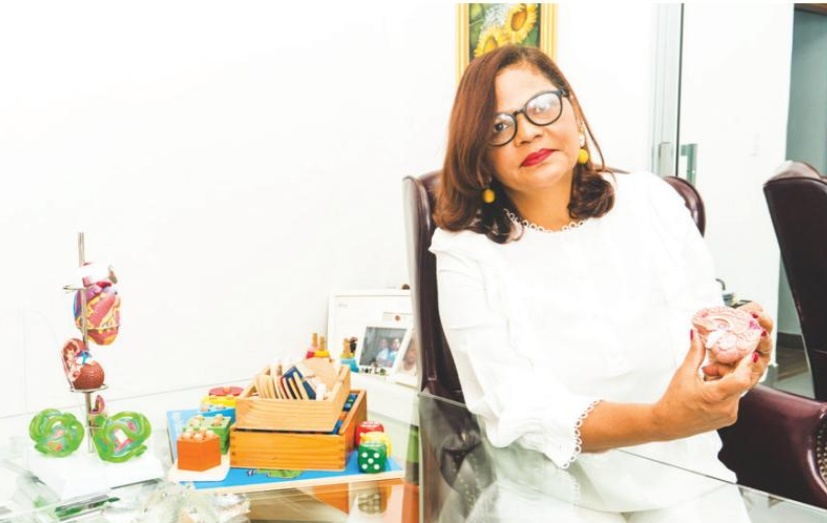 Santo Domingo.– Consciously establishing her own internal dialogue, Dr. Norma Duarte, founder and director of the Centro Neuropsicológico Nuevo Comienzo (New Beginning Neuropsychological Center,) based in Santo Domingo, wondered why experts did not delve into the biological bases of thought, behavior and other aspects related to the basic contents developed by personality theorists.

According to the psychologist, these contents served to make her students reflect, “but above all I was looking for answers to my internal processes, as if I were under the magnifying glass of my own dialogues, I placed myself as the object of my own experiments,” she alleges. She didn’t know exactly what she was looking for; however, she began to apply the method used by the science of psychology to understand, explain and predict something beyond what each educational experience revealed.

In her tenure as a teacher, Dr. Duarte taught several subjects that dealt with the topics of differential psychology, evolutionary psychology, motivation and emotion, different subjects of history and introduction to Psychology, human perception, psychosocial disorders, intervention of developmental disorders and neurodevelopment, personality theories, among others.

“When I looked at my students, I found significant symptoms of depression, inadequate self-esteem and autonomy, extremely high levels of insecurity, stress, lack of motivation, uncertainty about the future and about their present, lack of healthy habits both for studies and for self-management,” she explains.

On October 23, 2019, she published the first edition of the self-help agenda aimed at those who attend the New Beginning Neuropsychological Center, founded in 2006. “It was entitled ‘Daily Reflections… New Beginning’; the setting was the auditorium of the Faculty of Humanities of the Autonomous University of Santo Domingo (UASD), where she has been a graduate and postgraduate professor at the School of Psychology since 2006.

The path to neurodialogical communication

Dr. Duarte was concerned about making a contribution beyond the classroom and she decided to found the Center, in addition to her family life experiences. “One of the reasons arose in 1989 when my first son, barely 7 years old, suffered an accident in which he lost consciousness due to a fall that caused him to have seizures that atrophied several brain areas.”

Then she became an assiduous of biochemistry readings and continued with her questions. But by then she could not see clearly, until she specialized in Neuropsychology in 2016 at the Industrial Organizational School (EOI) in Madrid. “I began to organize my neurodialogical labyrinth and delved into neurobiological communication and the importance of biochemicals.”

She also had a passion to learn more about Dr. Santiago Ramón y Cajal’s findings on neuronal morphology and functionality. In addition, she studied the contributions of the specular neuron system or mirror neurons as a result of the investigations with monkeys in which he observed the stimulated areas of the brain.

Dr. Duarte studied research derived from sociology such as the importance of the situated subject, the components of spirituality, creativity, the historicity of the evolution of man, among other significant readings. “In this sense, I began to propose to my students that when they read and did the assignments, they should take into account a questionnaire that I devised. After reading, they should comment on what they understood and it would lead them to improve their condition as people, students, and future professionals.”

Regardless of the content taught, there was a kind of deeply reflective dialogue in the classroom. In general, the answers produced substantial changes in the students who carried out their assignments and even in those who only listened to the participation of their classmates. They highlighted that after doing the exercises they could make better decisions and used to give multiple examples of changes in different contexts of their lives:

“Each of these processes is part of neurodialogical communication. By producing an internal and deep dialogue without shortcuts, it allows us to naturally improve the human condition that biopsychosocially makes us unique. In this sense, we have written more than 150 thoughts that serve as guide to provoke modulating synaptic reactions that open the way to evolutionary processes. At the end of the self-therapy agenda, the person experiences sustainable levels of consciousness; that is, their thinking, feeling and acting in maturity and freedom make them feel more fulfilled,” Dr Duarte points out.

According to the renowned psychologist, users are able to experience that conscious cognitive dynamism, even in a single session, which allows them to modify new sentimental routes based on painful experiences and learning. “This new divergent intervention formula causes intrapsychic self-arousal and the users themselves and their families are amazed at the effects,” she adds.

“In interventions with children and adolescents, we work according to each reality. We design a basic approach scheme lasting an hour and a half or two hours, one day a week, so that the following objectives can be achieved: neuroeducational, neuroemotional and neurosocializing, in which children communicate their feelings and reflect on these feelings that are usually the driving force of their actions,” Dr. Duarte concludes.

Very impressive work. Excellent level of thinking and approaching a most complex area of cognition. Felicidades on your work, please continue in your research and practice. Look forward to reading more.