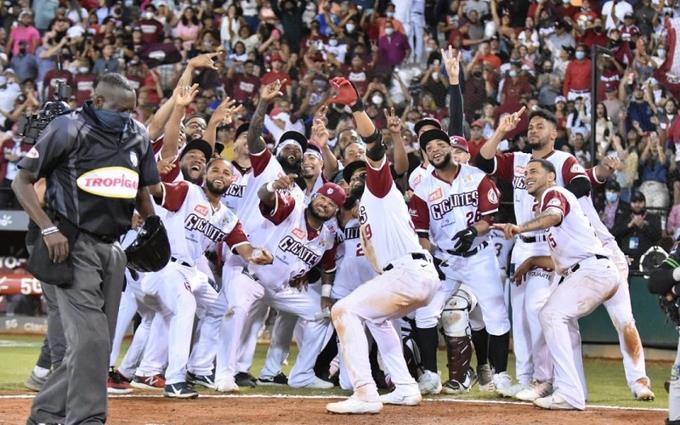 Giants players celebrate by simulating a selfie their third win in the final series against the Stars.

Kelvin Gutiérrez homered and doubled, drove in four runs, and the Gigantes del Cibao moved within one win of being crowned champions by beating the Estrellas Orientales 5-2 last night.

A Gustavo Núñez homer over the left-field fence to start the game against left-hander Enny Romero gave the Estrellas an early lead.

The Giants broke through in the bottom of the third. They went ahead 2-1 after capitalizing on a run by right-hander Rony García, who opened the game for the Pachidermos, and a costly error by shortstop Elehuris Montero.

Garcia overpowered the dangerous Hanser Alberto with an easy grounder to third, but Montero made a deflected throw to first, and the runners anchored at third and second.

Henry Urrutia was intentionally booted, and the bases were loaded. Kelvin Gutierrez towed two with a “texano” through the right field, sending García to the showers. In his place Román Méndez stepped in, and avoided major problems by dominating Marcell Ozuna and Carlos Peguero.

Not satisfied with the advantage, Luis Urueta’s team had another pair of runs in the fifth, produced by Urrutia’s single and the other by Gutiérrez’s sacrifice fly that brought the speedy Alberto to the plate.

Jeremy Peña batted in the second run for the Estrellas with a single in the sixth. Then, Kelvin Gutiérrez hit his home run in the eighth against Fernando Abad.

The fifth game of the series will be staged tonight, starting at 7:30 at the Tetelo Vargas Stadium.

After losing the first game of the best-of-seven final series, the Giants (3-1) have emerged triumphant in the other three games against the green-and-black team.

Gutiérrez, with two hits, and Urrutia, with one, were the only Giants to hit for no man’s land.

For the Estrellas, the best was Núñez with a home run and a single.

Embarrassment awaits at the Caribbean series!