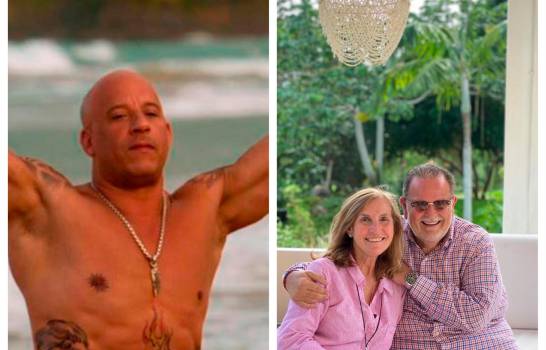 Famed actor, producer, and director Vin Diesel and television host Raúl de Molina are at the Casa de Campo resort, enjoying a vacation amid the charms and amenities of the rest center.

Diesel, who has confessed to being in love with the Dominican Republic, is staying in his villa in the exclusive environment of Las Minitas, where he enjoys the beach, games, and attentions that are their favorite.

The presence of the actor has been perceived by villa owners, who live in his neighborhood and in the Portofino square, but he has not been exposed to public events.

The Casa de Campo resort keeps discretion with these types of celebrities, who have access to various environments to enjoy in the middle of a sun-drenched and beach environment, which becomes ´memorable adventures.´

The last visit he made to the DR was on January 20 of this year, which was broadcast throughout the world, due to the millions of fans that the celebrity has.

In the midst of the global COVID-19 pandemic, several celebrities have visited this place.

Another famous person who enjoys the surroundings of the Casa de Campo world resort is “el Gordo” Raúl Molina, who opted for a villa with a huge pool in front of Vivero and not the beaches of Miami Beach, where he resides.

“El Gordo Molina” brags and mocks his fatness and plays in a video with a lifeguard with an animal figure, who runs away from his hands, while enjoying and commenting with his wife, Millie, with whom he enjoys bathing, on the spot.

Molina, who is a routine guest, tends to “kick the blow” from the arduous workdays at the Univisión network, where he has hosted the popular space “El Gordo y la Flaca” for years, along with Lili Estefan.

His Instagram has several photos and videos of his stay in the country, of which he has reiterated his beauty and good friends.

He revealed that it is the second time he has traveled outside the United States since the month of February when the pandemic began and that he enjoys the places where he goes.