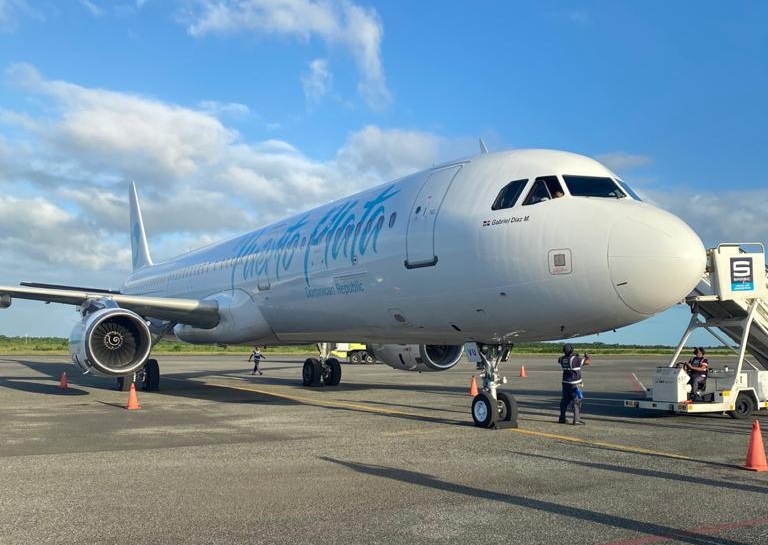 WILL OFFER LOW FARES ON FLIGHTS, WILL NOT CHARGE FOR THE FIRST BAG OR HAND LUGGAGE

Will link NY with the AILA and the Cibao on December 2, 2021

Frank Diaz, president of the new airline Sky Cana, announced that the company would offer low fares on flights, not charge for the first suitcase or hand luggage, and serve Creole food.

He explained that Sky Cana would begin its routes from New York to Santiago and Santo Domingo on December 2, 2021, with two daily flights operated by Air Century.

Diaz also said that there would be a daily flight to Santiago and another one to Santo Domingo. On the schedules, we expect the Airport Authority of New York to confirm the assignment of the schedules, and all aircraft will leave Terminal 1 of J.F. Kennedy Airport, which has 13 gates and is the only one that offers that comfort. From the checkpoint, there’s no walk of more than three minutes.

“We do not come to compete with the traditional airlines that fly from Santiago and Santo Domingo, we come to serve the market that corresponds to us, as a Dominican company. We come to offer a warm and dignified service, we come to give it the human warmth that our compatriots deserve, offering them the best attention and that smile that no one who is not Dominican can offer them,” Diaz added.

He guaranteed safety, and on-time departures and arrivals to the different destinations, explaining that Sky Cana will use state-of-the-art Airbus A330 aircraft with 24 seats for business class and 275 in economy class.

“Promoting our country, it will carry the slogan Go Dominican Republic,” he said about the identification that the planes bound for those destinations would carry.

He indicated that they would offer a competitive rate, and the ticket would include the first suitcase and hand luggage. You can also pay for up to four additional suitcases.

“On both routes we will provide 18,189 seats monthly to the Dominican diaspora resident in New York and especially supporting international tourism who wish to visit our country,” he added.

Diaz noted that creating a project of this magnitude, a country brand assumes a tremendous and expensive challenge. However, he says it is well worth it if you are accompanied by a great team of collaborators committed to the same dream that give their best every day to achieve that goal.

In addition, he said that there would be differences between Sky Cana and other airlines, such as treatment of passengers, service on board, punctuality, and operational safety, which is what we need. There will also be Dominican Spanish spoken by staff, although they also have pilots of other nationalities.

These statements were provided during the airline’s official launch at the Riu Plaza Times Square hotel on 46th Street and Eighth Avenue in Manhattan.

In principle it all sounds great! Now let’s execute, wish them nothing but success!

DEFINITELY WISHING THE AIRLINE THE BEST AS MOST MAJOR AIRLINES GOING INTO DOM REP LATELY ARE RARELY ON TIME. DOM REP HAD DOMINICANA DE AVIACION BACK IN THE DAYS AND OFFERED NICE PERKS BUT OMGGGGG THE AIRLINE WAS A HOT MESS. I AM HOPING THIS DOESNT TURN Into that past airline, THAT CUSTOMERS COOPERATE AND OF COURSE THAT IT FLIES TO OTHER AREAS of the country. A Dom Rep plane is rarely empty so im hoping the service is on point. I will definitely try the airline even though Living in NJ takes my family and I a year to get into Kennedy Airport. WE ARE LITERALLY LIKE 5 MINUTES FROM NEWARK AIRPORT

I am so happy to see a new airline that will offer great service to the huge market between N.Y. and Dominican Republic.
I just hope they will be willing to understand our culture and treat us with royalty..

Expecting too much, do you what kind d of food will be served?!

Sound good , but…will they be on time????, will the passengers behave?

Exactly. I AM DOMINICAN. And I know we always LATE for everything. lol. But I DO hope it’s a success. SkyCana has guts to start flying into jetblue’s home. Let’s see how old these A330s are. 1 cancelation and it creates a Domino effect. That’s when we start complaining. Jetblue tho, has spare aircrafts that can replace one with a maintenance problem.

Samana would be great. Direct flight ✈

Thanks God you’re here finally!!! We suffered all kinds of mistreatment and couldn’t do much. Now that we have a Dominican option we are delighted.

What about flight in E

What about flight in Newark New Jerey that will be great.

Congratulations! so happy to hear that

I’m surprised no one has asked the only question that matters: How much?

Oh My God 👏🏼👏🏼👏🏼Sky Cana should be come to Boston . There are a lot of Dominican here🥰

I Could agree more with Frank Diaz . We definitely need more airline’s options that’s traveling to the Caribbean specifically DR & HT because it’s too much headaches while waiting for airplane been delayed or canceled to coming back to USA.

Flights to El Cateu Samana is what we need,

I just love this…
To the airline- don’t forget that good service, low prices, punctuality and professionalism are the key.
As a Dominican, I would love to always use a dominican airline for my traveling needs.

Why creole food ? That’s not Dominican.

Yes it is … comida criolla

They translated criolla to creole lol. They will be serving dominican food.

Great!!
As a good dominican, I would love to be able to always use a dominican airline for my traveling needs, I am sure that many other dominicans feel the same way too.
Sky Cana -do not neglect the good service, do not ignore that the dominican travelers( people) must be treated with respect and dignity, do not overlook the importance of the low prices and, above all, exercise good communication with the customers, reduce or eliminate the obstacles that may come to interfere with the excellence of your service.
The dominican people is a great people deserving great service.
Sky Cana congratulations!

I’m so happy for us Dominican to have our own Arlines m. Any suggestions I work for American Arlines I’m here to help !!!

I really give this company great success and hope that corrupt Dominican Politicians don’t start to force this Company to hand them out unlimited freebies and perks under the table also would love to see them service the south west coast of the country like Barahona which has a full size international airport and it’s just rotting away. To think that this Zone is considered a hot tourist area for years and they do not service it ……why??

And the fact that the airline is serving creole food it is a great thing.

When will fl[ghts start to be sold?

When will the airline begin to sell flights ?

Finally!!!! A new airline for the Dominican Republic, we the New Yorkers really need more respect. Not like that other airline that treated us with no respect. So good bye JB

Thank God! FINALLY!!! A little over a month ago, I made what I HOPE WILL BE MY LAST RESERVATION WITH “that other airline…” In that phone conversation with jb ( I felt the need to contribute to their phone recordings, “ for training purposes only.” ) I told a representative ; that I was fed up with their business practices; that I was sick and tired of how jb treated US/DOMINICANS; and, furthermore, I ADMONISHED, that some time soon the very same community which put them on the map (when they were the “new kid in town”) would be the very same to put them in their place… My prayers were answered.
Thank you! I sincerely hope that you become a strong and JUST presence in the airline industry. I hope that all our people rally behind you so that you can give US 🇩🇴 LO NUESTRO!!!

I am very happy about this initiative because I am a frequent traveler, I congratulate you and I would like to be one of your first clients, please send me the address to share this information with my followers and I can buy my ticket for myself and my wife

The destiny should not be DR. WE DO NOT EAT CREOLE FOOD. WHY HE IS USING DR, ITS DESTINY SHOULD BE 🇭🇹

When can I do my reservation

Great, about time we got ours own airline.

very good idea but I think you are not prepared to face a Christmas season with only two planes. I hope and it does not happen the same as jetblue