The U.S. consolidates its position as the Dominican Republic’s largest tourist source with more than 50% of arrivals 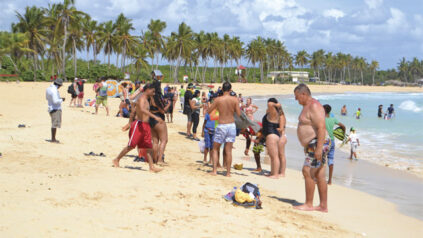 “The goose that lays the golden eggs of Dominican tourism is the United States, and that has many reasons, the first of which is the proximity, the connection from the cultural point of view, the country’s ability to connect with the type of food they seek, the service they demand, and the Dominican connects very well with the American tourist, they feel very comfortable, there are many facilities, and there are no major cultural disparities.”

This was stated by the executive vice-president of Asonahores, Andres Marranzini. They revealed that the United States currently contributes more than 50% of the total number of tourists visiting the Dominican Republic.

“So there are many elements, but the main thing is the proximity, at the end of the day, from the East Coast we have flights from one hour 40 minutes to 4 hours and a half, and in that entire coastline there must be 100 million potential American visitors, and that continues to be our north, and we are doing very well, better than everyone in the Caribbean,” he clarified.

As for the European market, Marranzini said that the collapse of the euro against the U.S. dollar had not had a negative impact on the arrival of tourists from the European continent.

He explained that they have been monitoring the movement of the dollar-euro, and in the past, when the euro lost value against the US currency, European tourism decreased, but this has not been the case this time.

The business leader said that the Dominican Republic had received the volume of European tourists projected for the current year.

Stop manipulating the peso against the dollar. The dollar is stronger than the euro. The the dollar is valued higher against the Euro yet the DR continues to devalue the dollar against the peso as compared to other world currencies. The US treasury will be notified and BanReserva’s operation in NYC should lose whatever licensing agreement the United States has been granted. Further if BanReserva continues to discriminate against Americans by only giving mortgages and loans to Dominicans in America they should be fined and no Dominican Bank should be allowed to operate in the US.