Wind and waves as fuel to celebrate the Cabarete Kite Festival 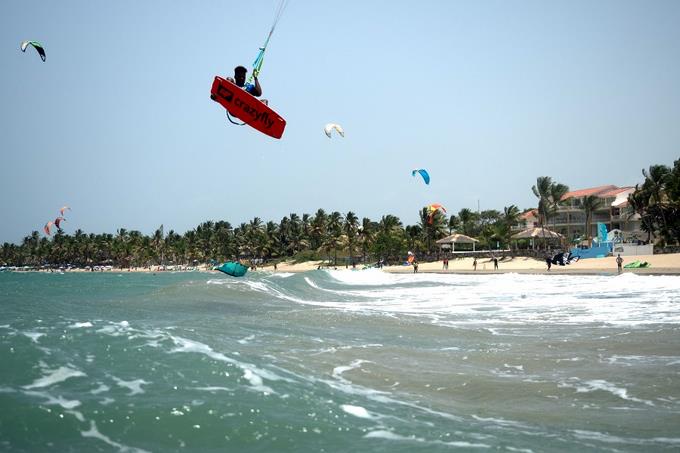 In its tenth edition, the Susi Mai water festival was full of activities throughout an intense week.

It is definitive that the municipal district of Cabarete, in Puerto Plata, is already recognized as the capital of water sports in our country.

We have been aware for years thanks to the number of activities, meetings, schools for teaching them and, above all, the competitions that have international character and rigor, with the visit of athletes from the different disciplines that are practiced here.

Best of all: every year the numbers increase.

In our recent visit to the north coast it has become clear that the sector has earned the seat it has, and even more so that kitesurfing (along with surfing, windsurfing, stand up paddleboarding and the new modality of the hydrofoil board ) is ( and they are) a sport; that those who practice it are athletes; and that if the East region of the island has baseball sports potential, then Cabarete has a large population of young talent who sees in the waves an escape route for a better future. It’s that simple.

This version of the Cabarete Kite Festival was full of activities throughout an intense week, with the sea as a witness: night parties, tastings, conferences and talks, beach cleaning and, of course, the main competition, where an athlete took the big prize. Madeline Corniel during her participation in the 10th version of the festival. © Pedro Braulio Álvarez & Mattias Ruby

THE FESTIVAL, WITH SUSI MAI

That is why we talked with the person in charge of all this gear, the Dominican-German Susi Mai, who has resided in the Dominican Republic since 1989, becoming an activist, promoter of activities linked to these sports and in 2003 she began her professional career as a kitesurfer touring the world.

“This year we wanted to offer a festival with different components, and the evolution is noticeable, since in 2019 we want to educate about the conservation and care of the oceans, offering conference talks with renowned personalities linked to several areas of science, and as an event main this festival brings the qualification for the Red Bull King of the Air that will be held in February 2020 in Cape Town, South Africa,” Susi tells us as she recalls her adolescence at the local beach.

In that order, she says that this event is an annual kiteboarding competition that aims to choose the king of freestyle, where riders compete by doing a variety of tricks in each jump and take into account the most original style and height of each peak air. “The kite is a kite that pulls you on a surfboard or board with special boots, and as there has always been that fascination of flying, it is the perfect sport to get carried away by the imagination on the water,” Emphasizes Mai.

However, rather than watching water sports we also had the opportunity to have an exchange of ideas and meet international figures from different areas of science, guests who enjoy kites, surf, the sea, and have all that in common.

“That is why we must encourage everyone to come, meet and to have continuity and get involved with the foundations at the local level. The sample is that the town has been getting involved little by little, and something important is that the Dominican Republic has learned over time what the consequences are of destroying nature,” concludes the organizer making it clear that the idea is for this platform to grow and hold an ocean festival every year. After several days of sunshine and varied activities, last Saturday, July 27, Red Bull King of the Air representative Alex Vliegge said: “We came to Cabarete in search of the most complete extreme big air rider, and we found it.”

Thus they announced the winner. Thanks to his diversity and powerfully aggressive style, Luis Alberto Cruz assured his victory over Posito Martínez (both locals and friends forever), resulting in a direct passage to Cape Town to face the best riders in the international big air scene.

Luis Alberto Cruz, a 28-year-old, came down from the podium and told us: “This victory is very important, both for the country and for the Star Kite brand, which is supporting me right now, since not all the world has the chance to reach the King of the Air of Red Bull. I feel very proud to represent the country and we will do our best in South Africa for that great challenge.”

The emotion became palpable by making it clear that his family was there supporting him as usual, merging all in a hug before the applause of the public. The second awards table was completed with the women’s category, when Helena Lundberg won the third place, very close to Keila Ponti in the second, while the local ripper Madeline Corniel (representative of the Mariposa Foundation) achieved the major jump, winning the first place.

What is coming for Luis Alberto is the possibility of conquering this competition in Cape Town in 2020, and thus being able to advance to the Youth Olympic Olympics next year, where, in 2018 the Dominican Adeury Corniel also won first place and a gold medal in the kitesurf category, in Buenos Aires, Argentina.

“If you don’t ride a kite or a surfboard, you can’t understand what it feels like; the adrenaline we feel when riding a wave or flying through the air.”

In this way, I met the veteran kitesurfer Luciano González upon arrival at La Boca beach (about 15 minutes from Cabarete), prior to the coverage of this competition. It is an enclave where the Yasic river flows and connects with the ocean between dunes and freshwater. The idea was that the participants of the Cabarete Kite Festival did a downwind to Encuentro Beach.

So my last day in Cabarete I had no choice but to follow Luciano’s advice and go to Marcus Bohn’s 321TakeOff school and try to ride a wave. How many times did I fall off the table? In an upcoming report, the answer …