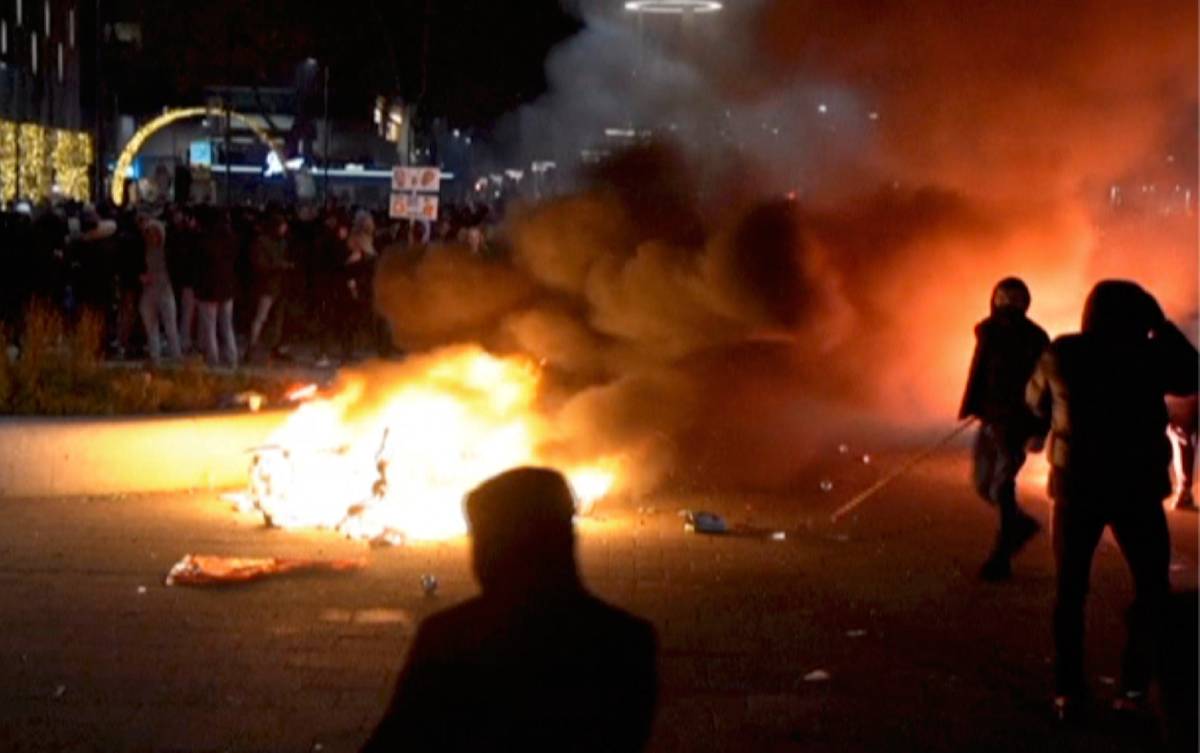 In this image, taken from a video, protesters protest against government restrictions due to the coronavirus pandemic, on November 19, 2021, in Rotterdam, the Netherlands. (MEDIA TV ROTTERDAM VIA AP)

“On several occasions, police felt it necessary to draw their weapons to defend themselves” as protesters attacked the port city’s business district, setting fires and throwing stones and fireworks at officers, the alderman, Ahmed Aboutaleb, told reporters early Saturday.

“They shot at protesters, people were injured,” Aboutaleb added, who had no further details on the wounded. Authorities also fired warning shots.

Several officers were injured, and dozens of people were arrested. The arrests are expected to increase after studying security camera footage, Aboutaleb added.

Images taken at the scene of the clashes showed at least one police car on fire and another with a bicycle embedded in the windshield.

Calm returned to the streets after midnight following the intervention of riot police and water cannons.

This was one of the worst outbreaks of violence since the first restrictions were imposed to curb the pandemic last year. In January, rioters attacked police and set fires in the streets of Rotterdam after a curfew was enforced.

Police from across the country traveled to Rotterdam to help control the situation on Friday. According to local media, the incidents involved gangs of violent soccer fans intensely opposed to vaccine passports.

A video posted on social media and broadcast by Dutch TV station NOS shows a person shot in Rotterdam, but it is not immediately known what happened.

Police explained in a tweet that “it remains unclear how and by whom” that person was apparently shot. As a result, authorities opened an independent investigation into police shootings and that they are increasingly using guns.

The government announced that it wants to enact a law allowing companies to restrict the covid passport access system only to people who have been vaccinated or have recently overcome the disease, excluding those who have tested negative for the virus.

The Netherlands has seen a spike in infections recently and imposed a new partial lockdown a week ago.

These people are doing the right thing to protest this vaccine mandate madness. I agree with the people in this case. But on another note I’m also pleased to see the police unlike in the US are actually doing something against mobs and riots. If these BLM and other idiots got shot in the leg and in the ass a few times billions in damages could have been saved and lives too.

Protesters against vaccinations should take a couple of days and work in hospital emergency wards. My nephew is a doctor in the Netherlands and he describes the frustration of the situation. The sick must stay at home because there is no more room at the hospital to admit them.

No reason to take rights away from anyone.

There is no excuse or rationalization of tyranny.

That said, many Germans in the late-30’s also agreed with gubmint targeting groups for restrictions.