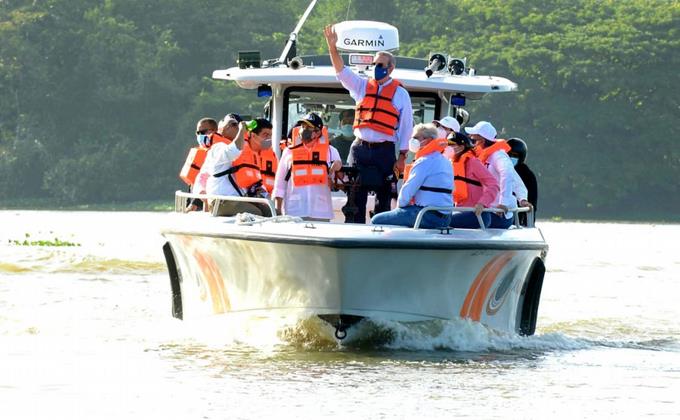 President Luis Abinader greets from a boat, during a tour along the banks of the Ozama and Isabela rivers, accompanied by the Minister of the Environment, Orlando Jorge Mera, and other officials.

The president declared that the naval entity’s management in anti-narcotic operations had been a “truly extraordinary task.”

In just two months of management, the Dominican Republic Navy has doubled its interceptions against drug trafficking and other illegal activities by 260 percent.

This was affirmed yesterday by President Luis Abinader, who spoke to the journalists before setting sail on his Isabela and Ozama rivers tour.

“I want to congratulate the head of the Navy, Vice Admiral Betances, for the excellent work he has been doing. I want you to know that in these two months, since August 16, the Navy has been able to intercept 260 percent more in two months than what was done from January 1 to August 16 in terms of drug trafficking and other illegal activities,” Abinader said.

The president said it had been a “truly extraordinary task” of Vice-Admiral Ramon Gustavo Betances and the officers and soldiers under his command.

Operatives
According to the data handled by the LISTIN DIARIO, as of August 17, the fuel supply was increased by 45% to all naval surface units, which remain at 90% of their operating capacity.

Also, a preventive patrol was established along the entire coast of the Dominican Republic.

Fight against drugs
One of the promises made by President Abinader has been to carry out a reform of the National Police to seek a solution to the problem of citizen insecurity in the country.

Among the referred reform objectives is to eliminate police corruption, achieve that this institution is managed more transparently, and modernize it with the best technology to fight drug trafficking.

In this last aspect, he has reiterated the “special relationship” that the country has with the United States, with joint operations between both nations to stop illegal drug smuggling operations.

Other promises of reform include better payment for police officers.

“This is a decision that has been one of the main promises to the Dominican population to make a transparent, honest, better-paid police force, also modernized with the best technology to fight crime and drug trafficking,” said Abinader.

Creole is the most wanted by the DEA.
Dominican Julio Alex Diaz, aka Julio Menan, is the second most wanted man by the U.S. Drug Enforcement Administration (DEA), ranking second among the top 10 most wanted fugitives for their drug trafficking ties.

Although he topped the list in 2019, the DEA placed him in second place, being displaced by former Mexican police officer Nemesio Oseguera-Cervantes, alias “El Mencho,” who is the leader of the New Generation Jalisco Cartel (CJNG), one of the fastest-growing transnational criminal organizations in Mexico that is among the most prolific methamphetamine manufacturers worldwide, according to the anti-drug agency.

Julio Alex Diaz is accused of conspiracy and possessing to distribute heroin, fentanyl, and cocaine that he allegedly received from drug cartels in Mexico and the Dominican Republic.

In December 2016, he was charged along with 20 other people on those charges. According to the investigation, Diaz was born in 1974, and his last known address was in the Roslindale suburb of Boston, Massachusetts.