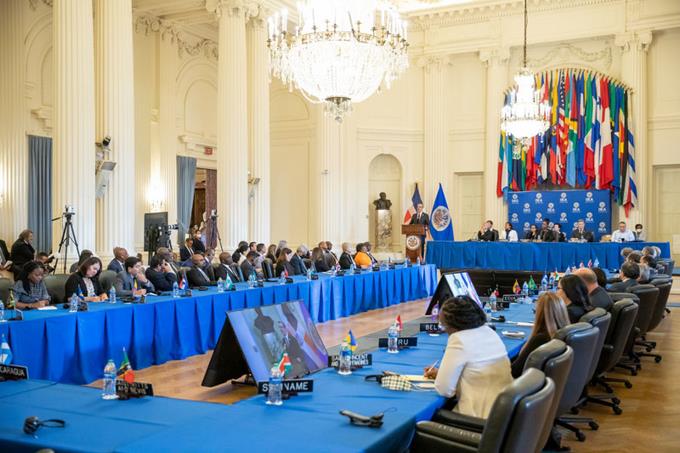 President Luis Abinader delivered a speech yesterday before the Permanent Session of the OAS in Washington, where he insisted on taking measures due to the crisis in Haiti.

Santo Domingo, DR
Although he vaguely touched on topics such as the enactment of the Law of Extinction of Ownership, economic growth, and the management of the pandemic, the main point of the President’s speech before the Permanent Council of the Organization of American States (OAS) was the socio-political crisis affecting Haiti.

Amid his remarks, the President stated that this crisis directly affects the security of the Dominican Republic.

The Dominican head of state also called on the OAS and its Secretary General, Luis Almagro, to play a “decisive role” in the battle against the Haitian crisis and thus help the Haitian people and raised a series of points on which the international organization, in conjunction with the United Nations (UN), can carry out to achieve the recovery of the Haitian territory.

“How can the OAS collaborate? Haiti has requested cooperation to improve the security of certain critical infrastructures, especially its ports and airports. The Dominican Republic has accompanied this interest and has supported all the initiatives that the Inter-American Committee on Ports has conceived to materialize this objective. So far, very little has been achieved; this is an urgent action, and efforts must be redoubled…as soon as security conditions permit, it is necessary to collaborate with the Haitian authorities to organize an electoral process that will result in a government and elected authorities with leadership, legitimacy and popular support. The OAS must continue to carry out fundamental actions in favor of democratic elections, one of which is to provide an adequate civil registry for the entire Haitian population,” said the President.

Abinader also stressed other points, such as that the OAS should “assist” in the creation of mechanisms and capacities related to the control of arms and ammunition that reach the hands of the criminal gangs that control a large part of Haitian territory and to coordinate with member countries and the UN, the training, education and controlled supply of the Haitian National Police.

The President warned that the current situation in Haiti could be defined as a “low-intensity civil war” and that international organizations should act “responsibly and now.”

“If the Americas is a zone of peace, as I said a while ago, it is largely due to the Inter-American system, whose backbone is this organization. The OAS is as relevant today as it was 74 years ago. It has allowed us to generate spaces for dialogue, harmonize our legal systems, strengthen the protection of human rights, and, in general, create shared democratic values”, exclaimed the Dominican President.

The President’s intervention came hours after ordering the evacuation of all Dominican diplomatic and civilian personnel who were on duty at the embassy and the national consulate in Haiti due to the situation of violence there.

In keeping with the meetings scheduled in Washington, the U.S. capital, President Abinader held a meeting yesterday with the Vice President of the United States, Kamala Harris, in which members of the Caribbean Community (Caricom) also participated.

The meeting began at 12:30 pm and concluded around 3:00 pm,
During the meeting with Harris, they reviewed some of the issues discussed at the meeting held in Los Angeles on June 9.

Dominican Foreign Minister Roberto Alvarez also participated in the meeting.
In the morning, the President met with the leader of the Democrats in the Senate, Charles Ellis Schumer, who showed interest in Dominican domestic policy, Dominicans in the United States, and the Haitian problem.

He also held another meeting with more than 30 U.S. members of Congress, to whom he made a presentation that allowed them to document Haiti’s reality and the importance of international aid to the neighboring country. This meeting was coordinated by the senator of New York of Dominican origin, Adriano Espaillat.

President Abinader arrived at the OAS headquarters at 4:45 am for his speech to the members of the OAS Permanent Session. Previously he met with the Secretary General of the organization, Luis Almagro.

Since the beginning of his mandate, Abinader has been emphatic in pointing out that “there is no Dominican solution to the Haitian issue” and that international organizations should “take more action on the matter.”

Abinader guarantees that the government will do everything in its power to ensure the peace and security of citizens and all persons under its jurisdiction.

The international community couldn’t care less about Haiti unless if is to accuse DR of some alleged wrong doing. Other than that Haiti can sink in the bottom of the Caribbean sea and nobody cares, as Joe Biden once said.