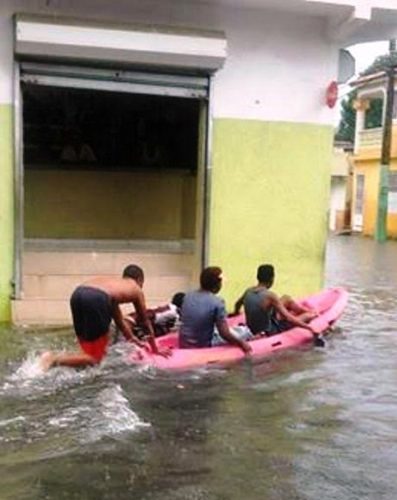 Puerto Plata.- Two people missing with little hope of finding them alive resulted from several days of continuing downpours over the region, with 1,625 people evacuated and numerous urban sectors and towns under floodwaters.

According to Puerto Plata Civil Defense, the county seat, Imbert, Luperón and Sosúa are under heightened alert , as the heavy rains unleash flash floods which damage homes and crops and wash out roads.

Meanwhile Civil Defense and other first responders continue the search for Miralba Albania Cabrera and Carlos Eduardo Salazar, who were swept away in a SUV by a swollen stream several days ago.

Puerto Plata Civil Defense director Huáscar García told listin.com.do that many sectors in the city are flooded, forcing 120 families to evacuate, adding the the situation is being closely monitord to proceed to remove others from high risk areas.