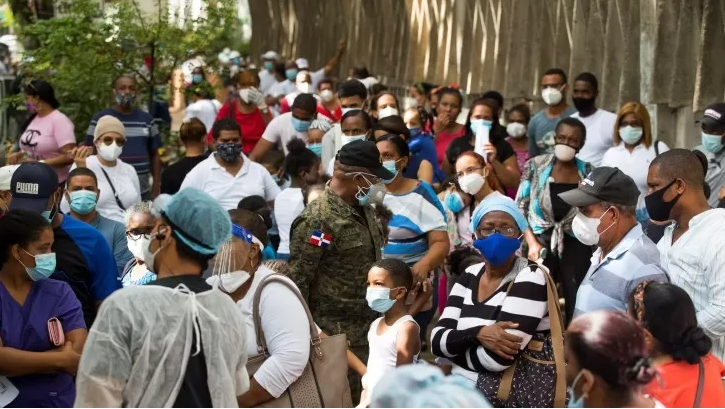 According to the data, 90.9 % of the people surveyed by the CEC said they agreed with the social distancing measures and the mandatory use of masks imposed by the Government to prevent the spread of covid-19.

SANTO DOMINGO, Dominican Republic – On Monday, February 1, the Dominican Republic celebrates 11 months since the first imported case of covid-19 was confirmed, the disease that has affected more than 214,000 Dominicans and claimed the lives of 2,666 patients.

The deadly pandemic, which has shaken the economy, unraveled and recreated daily life, and put pressure on health systems worldwide, continues to add victims despite measures that seek to slow its advance.

The Dominican Republic has not been exempt from measures to limit the impact on the economy, health, and education of its citizens.

According to a survey carried out by the Cibao Economic Center (CEC), 90.9% of the people consulted said they agreed with the social distancing measures and the mandatory use of masks imposed by the Government to prevent the spread of covid-19.

The opinion gathered by the CEC is given even though 75.7% of the people consulted said they had not been infected by covid-19 nor had any of their relatives. This number is followed by a distant 8 % in which the respondent stated that he or she had been diagnosed with the virus, 4.9 a brother or sister, father, mother or children 2.8 % respectively; grandmother 1 % and grandfather 0.6 %.

The Centro Económico del Cibao (CEC), a company founded in 1988 and dedicated to conducting surveys and market studies, based in Santiago, and Editora Acento, a digital communications company that publishes the Acento news portal and the AcentoTV channel, agreed on an agreement to conduct public opinion studies on various topics.

However, accepting the measures that have had the most significant impact on mobility and the economy is diverse, oriented towards greater flexibility.

Likewise,67.1 % disagreed with the decision of a total closure of the economy, and only 28.2 % of the respondents were in favor or very much in favor of complete closure.

However, opening bars and restaurants were not generally supported by respondents: 42.3 % were in favor or very much in favor of reopening these businesses, while 55.6 % were against.

Churches – which have also had to adapt to sanitary measures to prevent contagion – were indicated as places that should be open without restrictions by 65.7 % of those consulted, compared to 32.8 % who disagreed.

The closing of airports as a measure to prevent contagion did not meet with those consulted’s approval since 67.3 % disagreed or strongly disagreed with this measure, while 27.7 % were in favor of closing them.

In the opinion of 61.6 % of the people who participated in the CEC survey, hotels should remain open, while 34.1 % thought they should close their doors.

The opening of gyms divided the participants’ opinion: 48.6 % agreed that they should be allowed to operate, 44.3 % expressed opposition, and 7.1 % said they did not know.

The majority agreed that as a primary measure, people should take care of themselves, with 93.6 % voting, with only 5.9 % expressing disagreement with that position.

Last Friday, 22nd, the Government announced the relaxation of the curfew schedule, from 7:00 p.m. from Monday to Friday and from 5:00 p.m. on weekends, with three hours free for circulation.

More than 79.6 % of the people consulted were in favor of a curfew with a unified schedule every day, including Saturdays and Sundays, at the same time, compared to 17.1 % who expressed their opposition.

To conduct the survey, the Cibao Economic Center consulted 1200 people over 18 years of age residing in the entire national territory, with face-to-face interviews, from Tuesday 19 to Thursday 21 January 2021.

The sample was probabilistic in all its stages, selecting randomly, the homes and the interviewees.