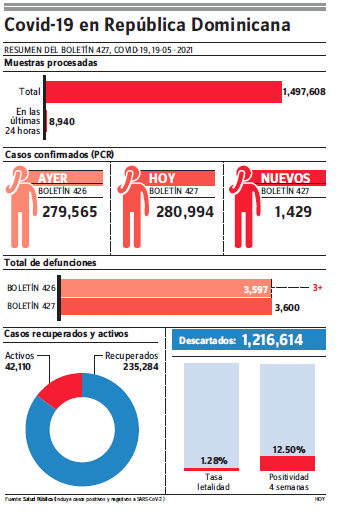 The positivity for covid-19 continues to grow, and yesterday, the authorities placed it at 23.83%, while the report of cases rose to 1,429 in the last 24 hours.

According to data comparisons, the positivity and number of cases are similar to those recorded in the country in July 2020, but restrictive measures have not been imposed.

Three deaths were also reported due to the respiratory viral disease affecting the country.

The data are contained in bulletin number
427, issued by the General Directorate of Epidemiology, an agency of the Ministry of Health.

The beds. Greater Santo Domingo is experiencing a delicate moment of the disease, which has raised the number of serious patients and the occupation of beds is very high. Yesterday, 49% of the ventilators were occupied, 197 of the 403 existing ones.

The hospital network has 2,426 covid-19 beds, of which 867 are occupied, for 36%. There were 306 beds occupied yesterday in intensive care units, out of the 539 enabled by the system, which implies 57%, high occupancy in these lines causes concern.

Deaths. The General Directorate of Epidemiology reported three deaths in the last 24 hours, none during that time. Of these, 28.39% had hypertension as comorbidity, and 17.81% had diabetes.

The case fatality rate is 1.28%, and the mortality per million population is 344.55, Epidemiology stated in yesterday’s bulletin. Deaths are not always reported in the time required by the authorities.

Risk groups. Risk groups continue to be people with comorbidities. People with obesity and immune disorders are at risk.

It also states that there are 955 pregnant women affected by the coronavirus, 955 health workers, and 30,948 people under 20 years of age.