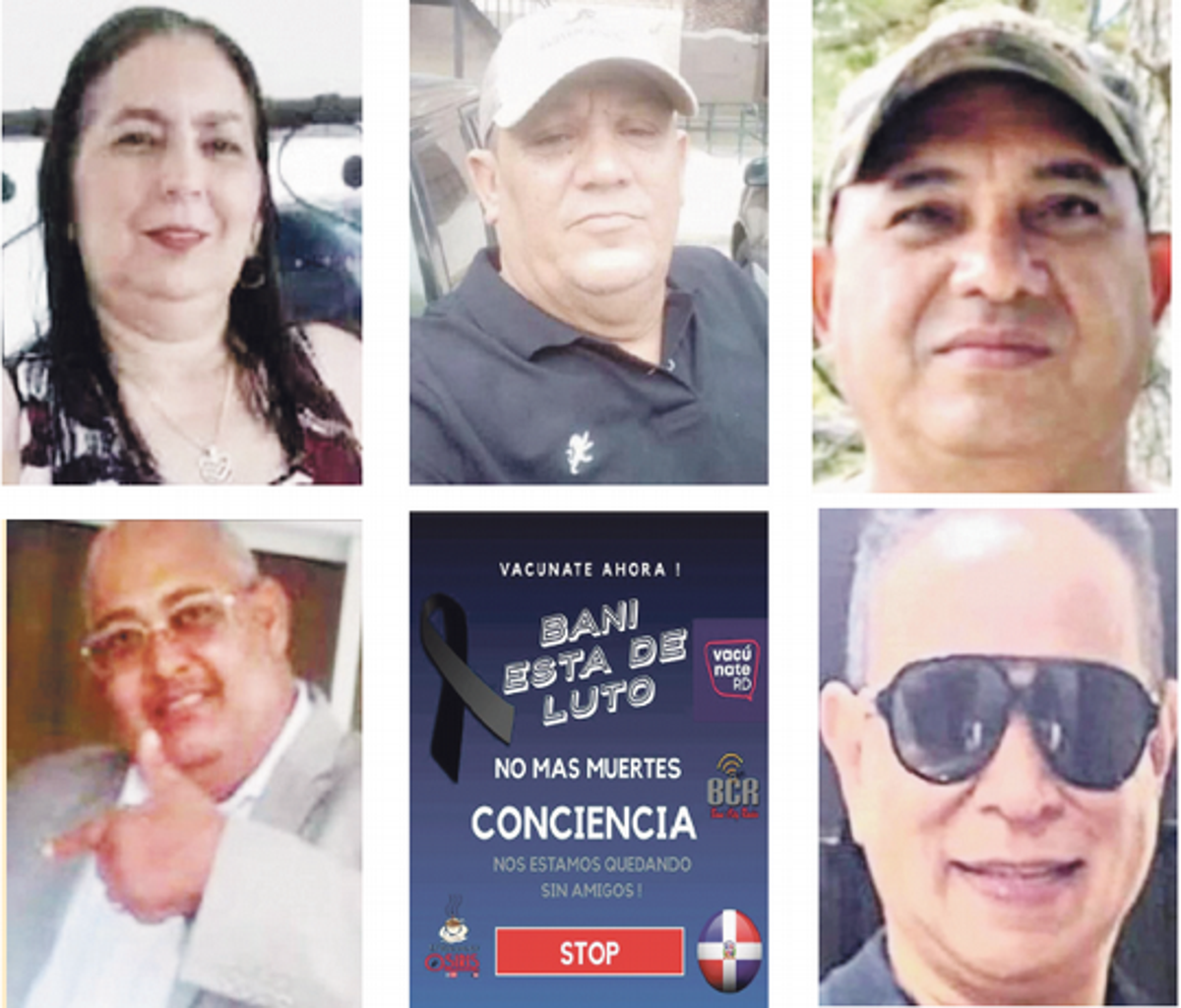 In a few days, well-known people have died both in the city of Baní and in Boca Canasta, El Cañafístol, Sombrero, El Llano, Paya, Pizarrete, Villa Fundación, Peravia and other towns in the province.

In a few days, well-known people have died both in the city of Baní and in Boca Canasta, El Cañafístol, Sombrero, El Llano, Paya, Pizarrete, Villa Fundación, Peravia and other towns in the province.

The positivity and deaths due to the coronavirus are dramatically impacting the families of Baní, especially so far this month of June, where the deaths due to this pandemic exceed a dozen, men and women, young and old, although in the bulletins published by Public Health every day this reality is not reflected at all.

From the rural area, in communities that proudly exhibited their zero positivity and absence of deaths, today they cannot escape this deadly virus (Covid-19), since cases of fatalities are reported in Boca Canasta, El Llano, Cañafístol, Paya, Villa Fundación, Pizarrete and others, a picture that is repeated with equal crudeness in the neighborhoods of Baní Pueblo Abajo, Pueblo Nuevo, Villa Majega, Los Cajuilitos, Los Barracones, downtown, and others.

The reality is that the affected families themselves, who mourn and bury their dead, report at least 12 deaths from coronavirus in different sectors of this population between bulletins 440 of June 1 and 460 of June 22, 2021. Only in this month of June, the deaths of Mrs. Elsa Milagros Pérez (Aguito), on June 5, in Pueblo Abajo; Manuel Antonio Gómez (Peligro), the motoconcho Felín Mejía, from the Cañafístol community, and Juan Troncoso, from Boca Canasta, died on June 9.

On the 10th, one of the deaths that has had the most significant impact on the banileja society in this pandemic occurred, that of the young legal professional, who stood out as a brilliant lawyer, known as Luis Felipe Zayas, who resided with his family in the BHD neighborhood.

On the 11th, the death of Ángel Ubrí (Bijú) was registered, and on the 12th, that of Rafael Augusto de León. Two other deaths of well-known people in Baní occurred on Wednesday 16; Manuel Medina (Manuelcito) and on Friday 18, that of José Guerrero (José Tentación).

The string of deaths in Baní due to this lethal pandemic continued on Saturday 12 with Martha Peguero and on Saturday 19 with Fidel Tejeda (Cano), a blacksmith by profession, who worked in his workshop on the Baní-Sombrero highway, as well as that of Mrs. Helena Soto, from Villa Fundación.

In addition to these, two more deaths caused deep sorrow among the people of Baní; that of the well-known lawyer Robert Lara, on April 31, in the city of Baní, and that of Esteban Soto Pimentel, in Boca Canasta, on May 31.

Cry of impotence
Dr. Polanco raised on his Facebook page his cry to President Luis Abinader, expressing, “President, patients are dying in the waiting room.”

Clamor
Doctors to the cry
The horror and the crude reality that patients, families, and doctors live here are reflected in the outcry of this doctor in Baní, Dr. Wilfredo Polanco, a prominent pulmonologist from Baní, who has been dealing with cases of coronavirus in Peravia province since this pandemic began.

Teteos and parties
All these deaths are registered in a town where the teteos and privitys (clandestine parties) and discos, terraces, and colmadones do not stop, full of consumers of alcoholic beverages in and out of curfew hours, which triggered the positivity.