Fewer people are buying pork because of swine fever 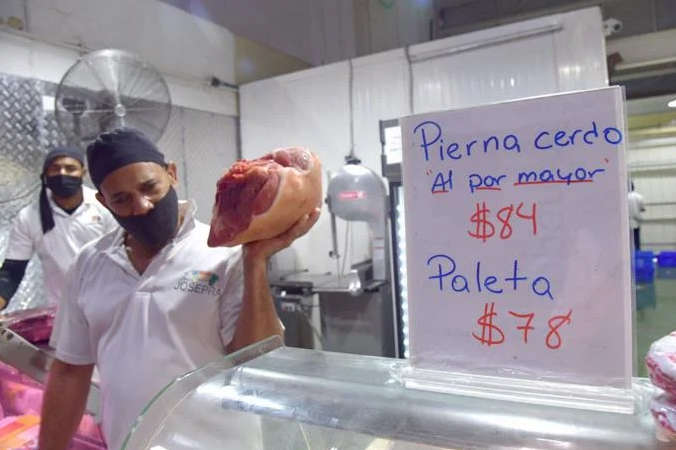 “Today they tell you one price and tomorrow another,” he said, after asking with a laugh if he had “damaged” meat, Ramona Martinez said, referring to pork.

With anguish reflected on their faces and the characteristic gesture of moving their hands from side to side, typical of when things are not going well or “more or less,” the meat traders of different markets of Greater Santo Domingo show, without words, the repercussions of the African Swine Fever (ASF) on the profits of their businesses.

The disease that affects pigs and which has been circulating in the Dominican Republic since the end of July is not transmitted from pigs to humans, according to national and international health organizations; however, every day, there are fewer and fewer people coming to any butcher shop in search of this type of meat.

Ricardo Beltré, the owner of a shop in the Villa Consuelo market, is one of those affected by the situation that has seen him go for three days without selling a single pound of pork, he said.

“Oh no, nothing is being sold,” said Beltré, leaning against the display case that protected the cuts of meat.

Maritza Acosta, also from the Villa Consuelo market, assured that she has no longer ordered pork from her suppliers due to the drop in sales.

“I have some pork left over from what I already had, but it is not being sold,” said Acosta, while specifying that “until this happens,” she will not supply herself with more pork.

They are not buying pork.
In the Duarte Market, the sound of knives and axes severely hitting the wooden trunks or metal tables would indicate that meat is being sold, and it is, but not pork.

The businesses dedicated to the commercialization of chicken and beef were those which kept the buyers waiting to be attended, a scenario which was repeated in the market of Villa Consuelo, the Merca Santo Domingo, and other stores of different points of the city, visited this Friday by a team of Listín Diario.

Ramon Santana, a vendor at the Duarte, pointed out that customers are “rejecting” pork and are instead buying like “hot cakes” chicken, whose price rose considerably between RD$78 and RD$85 a pound.

Santana pointed out that the most sold meat is beef because “people do not want to buy chicken either, because it is very expensive.”

Offers and specials
To sell the pork merchandise that the buyers question, some traders have chosen to promote offers and specials, as the butcher’s shop where Alicia Herasme works in the Merca.

This week, for example, they have pork leg, wholesale, at RD$84 per pound, and smoked products such as chops and “masita” at RD$100 and RD$115 per pound, respectively.

The population is moving away.
With doubts about pork consumption and the scarcity of chicken, Dominicans are already trying to vary their daily meals. Maria Rodriguez was scrambling to get ground beef for her lunch this Friday. “I am even making more vegetables, because everything is expensive, and one cannot afford the increases,” said the housewife, while Ramona Martínez complained about the variation in prices.