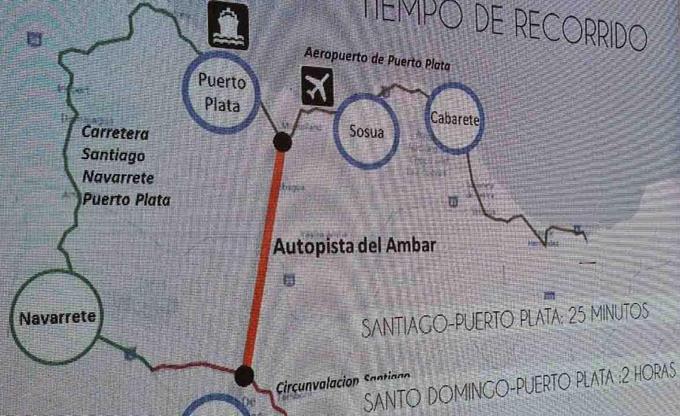 The construction of the Ámbar highway is one of the most desired works in the region. On this critical road that will link Santiago with Puerto Plata, Abinader announced the start of work during his visit to this city.

The president indicated that the construction of this road would be with the modality of public-private alliances, in which the private sector will be allowed to contribute its “capacity for innovation, entrepreneurship and financial ease”, to develop a project in less time and budget.

He also expressed that with this modality, there will be no more “shadow tolls” while guaranteeing that his government will use other means of financing “that do not harm the country.”

He said that the highway would be 35 kilometers long, and the Santiago-Puerto Plata route will take 30 minutes, while the one from Santo Domingo to Puerto Plata will take two hours.

On this road, the Minister of Public Works said that it means a revolutionary change in road communication between the Atlantic coast and the rest of the Cibao.

The official indicated that this route would cause an economic transformation, guarantee greater security, and directly and indirectly impact almost all sectors of the northern region of the Dominican Republic.

For Burgos, this track represents “the relaunch of regional development,” because it understands that it will reduce the time and space between important vital productive areas of the country.

The Santiago-Puerto Plata trip, located in the north of the country, will take 30 minutes, and Santo Domingo-Puerto Plata, in two hours.

Also, according to the official said, the road will have four lanes (two in each direction), safety walks in each direction, and separation of lanes with “New Jersey” type walls, with protective side rails.

The road starts at the Santiago Circunvalación and extends to the main road number 5, between Puerto Plata and the Gregorio Luperón airport.

He stressed that the highway would be vital to allowing a change in the positioning of the Atlantic coast, providing it with more significant potential as a “thriving” tourist hub.

“The Amber Highway is of special importance for these two important cities, as well as for the entire Cibao region, as it is one of the largest producers of agriculture and free trade zone products in the country,” said Ascención Burgos at the ceremony held this Saturday in the provincial government of Santiago, headed by President Luis Abinader, in which the process of construction and lifting of the work began.

He explained that the road would provide significant advantages for the export of traditional products from the Cibao provinces, since it is carried out through the ports of the southern coast, having to travel long distances, significantly affecting its costs, despite having the port of Puerto Plata at a shorter distance.

He added that the approach of the Atlantic Coast to the city of Santiago would contribute to an increase in the number of commercial flights available, and an increase in competition between airports, improving conditions for tourists.

He stressed that the offer of activities and trips of tourists from cruise ships and hotels to the city of Santiago and other tourist spots would be increased.

President Luis Abinader, whose visit aroused great expectations in Santiago, also expressed that with this modality, there will be no more “shadow tolls” while guaranteeing that his government will use other means of financing “that do not harm the country.”