Don’t get ‘drunk with success’ by robust economy: VP warns 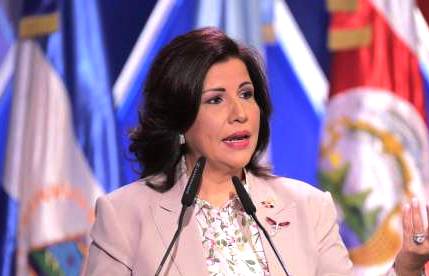 Punta Cana, Dominican Republic.-  “We want to put the Dominican Republic to act actively and proactively in the new economies that are being formed, the country cannot remain in black and white, it has to be a rainbow of economies,” said vice president Margarita Cedeño on Sun.

She said the vice presidency currently promotes innovation, social protection and intersectoriality in the country and in Central America.

“This rainbow of economies is defined by the United Nations Environment Program (UNEP) as the one that leads to the improvement of human welfare and social equality, while significantly reducing environmental risks and ecological scarcity,” the official told Diario Libre..

Cedeño said the orange or creative economy is the set of activities that in a chained way allow ideas to be transformed into goods and cultural services, whose value is determined by their content of intellectual property.

She said the blue economy recognizes the importance of the seas and oceans as engines of production because of its great potential for innovation and growth.

“Aware that the economic growth of a country does not always guarantee well-being, and noted that she works to strengthen social policies, education, health, innovation in the field and gender equity, by advocating for inclusive policies where no one is left behind.”

“In recent years we have seen how the economic indicators of the countries are improving, but sometimes we forget that the economic is not enough and that the agendas leave aside social development. The dynamics of growth and the rebound of economic activity threaten to make us drunk with success, which is not enough to improve the quality of life of our citizens.” Cedeño said at a forum hosted by the Central American Integration System (SICA), held in Punta Cana.