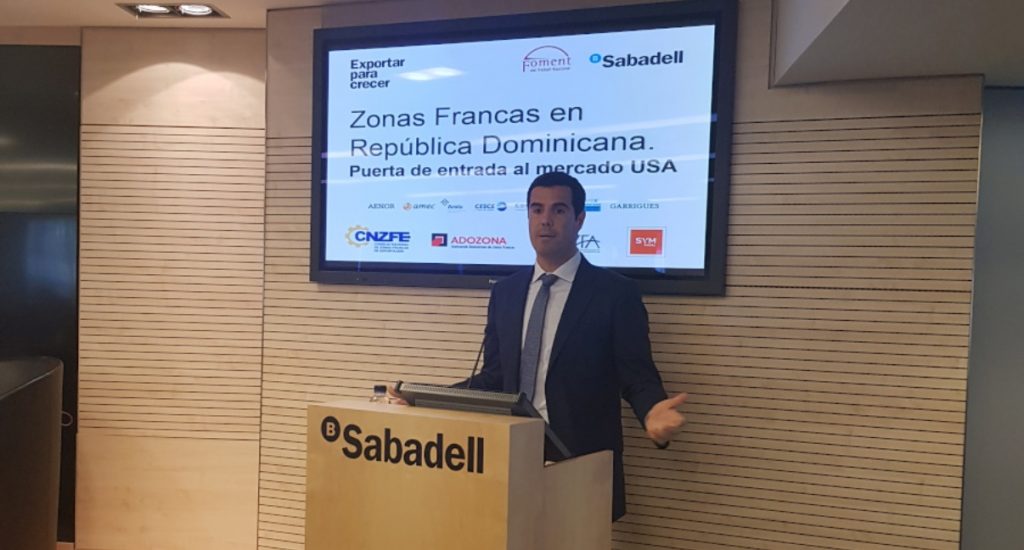 BARCELONA, SPAIN.- The legal security that exists in the Dominican Republic was highlighted here by the president of the Association of Free Zones of Latin America, Gustavo González de Vega. Among the significant advantages that this country offers to invest in the sector of free zones, a line in which the Caribbean nation is a leader in exports and attracting foreign direct investment.

Speaking before the Free Zones Forum of the Dominican Republic: Gateway to the United States Market and the rest of the world held in the auditorium of Banco Sabadell, the event was sponsored by the Export to Grow Foundation of Spain. González de Vega said the association he leads groups 600 free zones in 25 countries, with 10,000 companies that provide one million jobs.

He defined the free zone sector as the dynamic actor to generate jobs, attract foreign direct investment and the Dominican Republic is at the forefront, with the highest percentage of free zone exports.

“57% of exports from the Dominican Republic are from free zone companies, an important part to the United States,” said the business leader, notes a note from the Communications Department of the Ministry of Industry, Commerce, and Mpymes (MICM).

He said that in Barcelona, the free zones enjoy total exemption from the payment of duty and consumption tax. Still, he pointed out that in the Dominican Republic, neither fees are paid by the companies.

“For every dollar that is exempted from taxes on free zones, the country obtains benefits of up to ten dollars,” González de Vega said.

He considered that the success of this Dominican free zone system is in guaranteeing the legal stability maintained for 50 years.

“The best tax incentive is legal security because it is of no use to have tax exemptions if there is no guarantee that they will continue over time,” González de Vega said.

He explained that the legal stability that has been maintained as a government commitment, becoming the success factor of the free zones of the Dominican Republic.

He added that security is higher because there is a system that includes the certification of Authorized Economic Operator (OAS), and Dominican Customs continues to work to continue certifying all the actors in the sector.

Likewise, González de Vega said that the public-private relationship is an essential factor because the State provides the regulations and the private sector the investment, coordinated in the National Council of Free Zones.

The one in Barcelona is the second forum sponsored by the Sabadell Bank with the participation this time of Catalan businesspeople attracted by the investment climate that reigns in the Dominican Republic, said Kylian García, International Director of Work Promotion of the financial institution at the opening of activity.

Torres, during his speech, testified to the advantages that the sector represents for potential Spanish investors.

The bank facilitated this meeting with Spanish business people so that Dominican authorities and people in business take advantage of this forum and expose the benefits of the country to receive investments to those interested, the bank grants financing.

At the end of the meeting there was a round table with the participation of Silvia Cochon, Director of Promotion of the National Council of Free Zones; Carlos Flaquer, from the Caucedo Multimodal Port; the Spanish businessman Alejandro Larola, from the Arola company; Francisco Lages, of Sym Navaly Roberto Tejada, of Caribbean Likui Sugar.

The Dominican business mission arrived last night in Valencia, where on Thursday, it plans a third meeting with Spanish business people from this area, an activity also sponsored by Banco Sabadell.

The bank facilitated this meeting with Spanish business people so that Dominican authorities and people in business take advantage of this forum and expose the benefits of the country to receive investments. For those interested, the bank facilitates financing.