‘The kook is loose’ in Dominican Republic’s ruling party 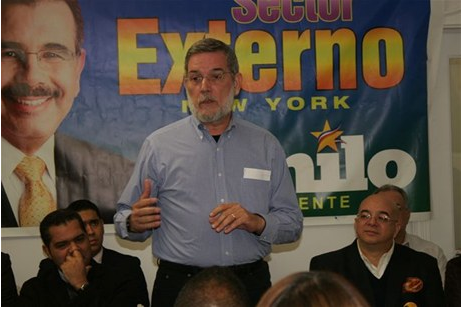 Santo Domingo .- The affirmation Fri. by president Danilo Medina spokesman Roberto Rodríguez Marchena that only his boss ensures the ruling party’s (PLD) permanence in power, drew immediate rebuke, including from his own party, the most scathing being by senior leader Franklin Almeyda.

“How much is tranquility worth? Your little check,” Almeyda tweeted,  and that Rodriguez is a #TumbaPolvoPorUnChequesito (yes-man for a little check).

Rodriguez responded: “In 2006, I resigned for loyalty to the ideas of Danilo that were mine and I DIDN’T CARE” about the check from Leonel (Fernandez, former president). You on the other hand, @franklinalm battle the government of @PLDenlinea as an obstinate opponent while you CHARGE THE LITTLE CHECK of 250,000 pesos AS A MINISTER WITHOUT WORKING.”

Almeyda tweet: “@RodrigMarchena The spokesperson who is not a spokesperson is implicitly abrogated authorship of trying to censor via the network. He also takes what’s not when, without being a spokesman, pretends to be the one of the governing party.”

The spat spread like wildfire in the social networks as PLD leaders and of other parties weighed in, as well as people from all walks of life.

Rodriguez sparked the flap when in a televised program said Medina’s approval rating topped 62%, and that many people want him to stay in office beyond 2020.

Though the Constitution bans Medina from running in 2020, his control of Congress could result in an amendment that allows his seeking a third consecutive term.