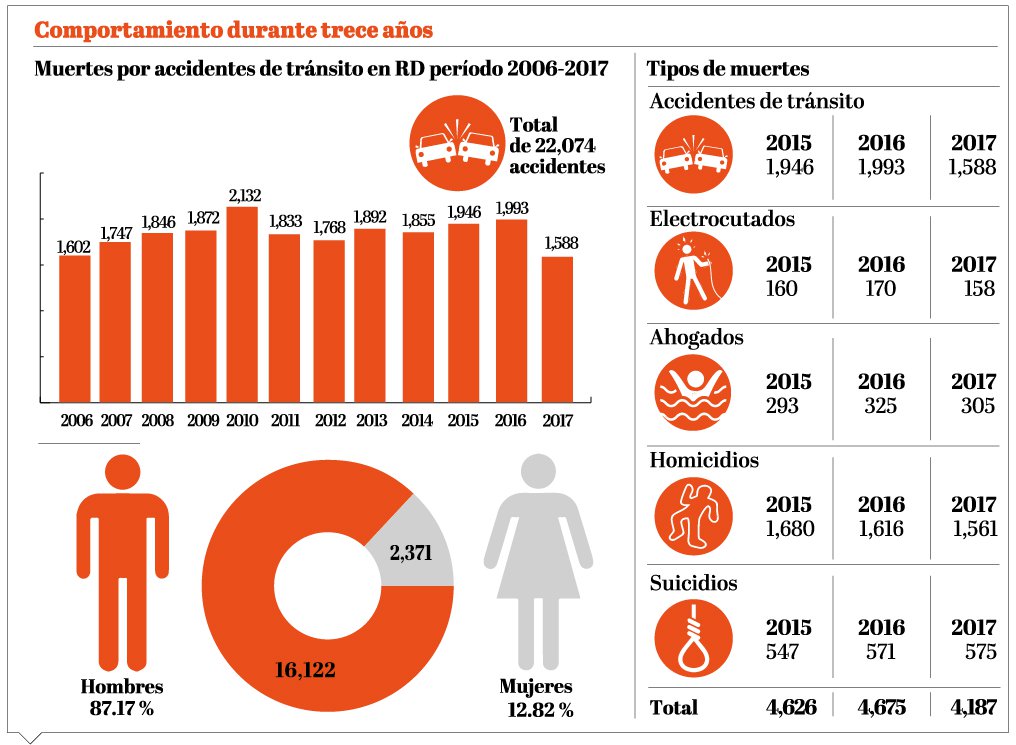 Santo Domingo.- Every single day five people lose their lives in road accidents in the Dominican Republic, representing the leading cause of death in the country.

In the past three years 5,527 people have died on the roads. Statistics show that the peak times for casualties are during vacation periods. The large number of people using the roads during these periods is combined with increased alcoholic drink consumption, which accounts for 70% of accidents, according to Dr. Ramón Leonel Ureña, director of Premat, the national program for road accident death reduction.

However, 2017 saw a 20% fall thanks to the education campaigns carried out by the authorities, using celebrities to send preventive messages. “Our recent campaigns have led to a reduction in road accident death rates,” said Dr. Ureña.

“Over the Christmas period, 15 out of the 33 people who were killed lost their lives in road accidents; 14 of them were on motorbikes and one was run over. These figures reflect a 20% decrease compared to the same period last year,” he added.

He pointed out that the people most vulnerable to road accidents are those who don’t use protection. “Motorbikes account for 67% [of road accident casualties] and 17% are pedestrians. 11% involve light vehicles and 2% heavy vehicles, while cyclists represent 1%.” The highest risk group is people between the ages of 15 and 29.

Colonel Rafael Tejada Baldera, spokesman for the General Directorate of Road Safety and Land Transport, said that public awareness and education campaigns have started to show some results, such as the increase in the number of motorcyclists who are starting to wear their helmets.

The videos used by the authorities were intentionally hard-hitting, graphic and dramatic in order to stress the risks and the consequences of dangerous driving. However, they are aware that a cultural shift is needed and that change will not happen overnight.