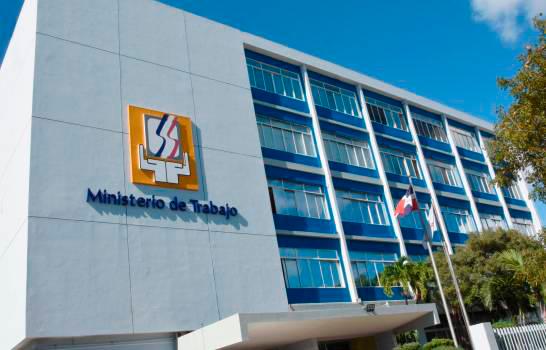 Facade of the Ministry of Labor, an institution that delivered a balance of the achievements made in 2019. (PHOTO: EXTERNAL SOURCE)

In the Dominican Republic in the last seven years, 735,027 new formal jobs were incorporated into the different branches of economic activities.

The information was offered by the Ministry of Labor through a document requested by Diario Libre, which indicated that the generation of jobs was mainly in the commerce, construction, agriculture, manufacturing, hotels, bars and restaurant sectors; energy sector, services, among other activities.

According to the authorities, 105% of the presidential goal “Generation of Decent Jobs” was reached with the indicated numbers.

The authorities told Diario Libre that the First Employment Program was launched on May 27, 2019, with the financial support of President Danilo Medina and an alliance with the General Directorate of Special Programs of the Presidency ( Digepep ) and the Progressing with Solidarity program ( Prosoli). This program was aimed at 6,200 young people between 18-29 years of age without work experience, to be trained in the “Work Placement Training (EIL)” modality, within the facilities of the companies for a period of three months, companies assume 80% of the insertion of trained young people, with greater emphasis on single women and mothers (65%), people with disabilities (10%) and young people who neither study nor work (ninis) (25%).

The Ministry of Labor explained that the youth will receive a minimum salary equivalent to that corresponding to the company in which they participate in the program. The program assumes the first three months of wages. The total amount of the program is RD $ 510,748,693.00.

The ministry revealed that 33 proposals from companies were received to insert 600 young people without work experience, most are in connection with companies, to start in the provinces of Santo Domingo, Santo Domingo Oeste, Santiago, La Vega, Bávaro, Haina and Barahona.

On the issue of Social Security, the Ministry of Labor explained to Diario Libre that, as of October 31, 2019, an increase of 77.67% of the population covered by Family Health Insurance was achieved and that the Dominican population with insurance coverage Health family reached a total of 7,945,903 members.

The department further assured that 3,659,666 affiliates were registered in the Subsidized Regime and 4,286,237 in Affiliated Regimes. According to the document, the growth of members of the Family Health Insurance was 253,017 sharpened in the year, representing 3.29%.

The Ministry of Labor, which is headed by Winston Santos, also president of the National Social Security Council (CNSS), cited the main achievements of that State body in the area of ​​Social Security: it increased from RD $ 3,000 to RD $ 8,000 at year outpatient coverage of the Basic Health Plan (PBS) without limiting its sale due to variation in the active substance; the basic medication chart and the one million coverage for high-cost events and procedures for newborns were approved.

The document details that the maternity allowance was increased from 12 to 14 weeks of the contribution salary; incorporation to a catalog of services provided by 27 state-of-the-art medicines for cancer treatment. Seven medications for kidney transplants and 44 new medical procedures and surgeries; approved the report on the “Action Plan RD + Simple and scope of the Digital Republic programs, simplification of procedures and regulatory reform,” presented by the general manager of the CNSS.

Also, other achievements are: extension of the term of coverage of medical care due to traffic accidents for members of the tax system; The breastfeeding subsidy was increased to salaried workers up to 33% of the salary that was less than three national minimum wages and, in addition, the Social Security coverage was increased from 60 to 65 years of age.