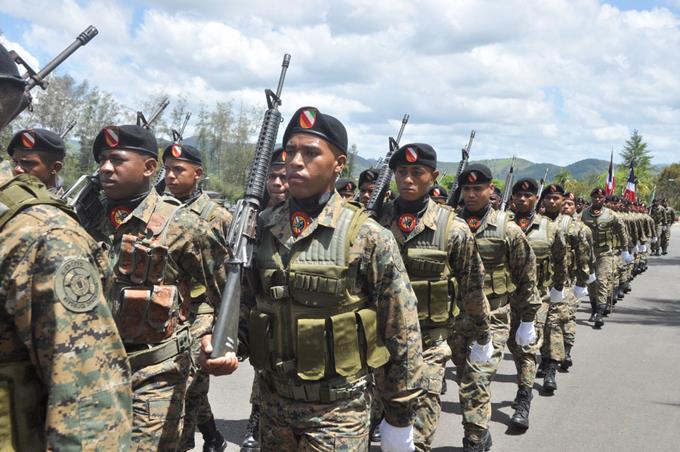 The country's military force is responsible for multiple tasks for the protection and defense of the territory.

Military force in serious trouble due to lack of funds

With the tenth month of this year underway, 90 percent of the Dominican military budget has already been exhausted. This situation creates a void for lack of resources that could prevent them from fulfilling their economic commitments for the coming months. Even more worrisome is the possibility that this crisis will wreck the personnel payroll.

Already in August, barely 10 percent of their total resources became the last milestone and reserve.

To further complicate the problem, in the middle of this crossroads, another setback arises, on top of the fact that, for next year, this budget will suffer a reduction of more than 2 billion pesos.

This automatically implies that the military authorities will have to continue making necessary expenditures for the coming year.

According to financial sources in the military field, the 90 percent exhaustion of the budgets of the Navy, the Army, the Air Force, and the Ministry of Defense occurred during the months of January-August of this year.

This whole financially critical landscape places the institutions safeguarding the country’s defense and sovereignty in a severe predicament to meet their economic obligations for October this year, November and December next, which would exceed 1.5 billion pesos.

It could affect the payroll.

Thus, the fears that, lacking sufficient resources to solve their financial debts in the coming months, the reflection of the crisis could reach the payroll with its effects, gain strength. Meanwhile, in anticipation of injuries to these institutions’ operations and plans, measures have been adopted to clean up payrolls and make economic cuts in various educational and social programs, and even in operational areas.

The current budget of the military institutions is RD$33,221,611, which indicates that, by 2021, this figure will be reduced to just over 31 billion pesos.

The cash availability of the Ministry of Defense was reduced from RD$1,445,460 in August to RD$6,085,170 in September, which puts this institution in a difficult position to fulfill its economic commitments for October, November, and December, which would exceed RD$1,500 million, always according to the sources.

The budget crisis affecting military entities can paralyze a good part of their functions. Their multiple responsibilities and plans to fulfill their objectives now hang in the balance, as they face a lack of financial resources.

The mission of the Dominican military corps is extensive. Still, its primary purpose is to defend the nation’s territorial integrity, guardians of sovereignty, and sustainers of peace and public order.

Another of their elementary attributions is to create favorable conditions for developing the nation’s productive activities under a climate of maximum security.

Its three armed corps, Army, Navy, and Air Force, are merged under training and efficiency and serve as a barrier to any threat, internal or external, to the system and its institutions, always subject to a general command institutionalized in the Ministry of Defense.

Other commitments of the military force consist in defense of the integrity of the territory, sovereignty, and its independence, ensuring compliance with the Constitution and laws, maintaining public order, protecting legal traffic, industries and businesses, providing support to authorities and officials in the manner provided by military rules and regulations, and protecting citizens and their property.