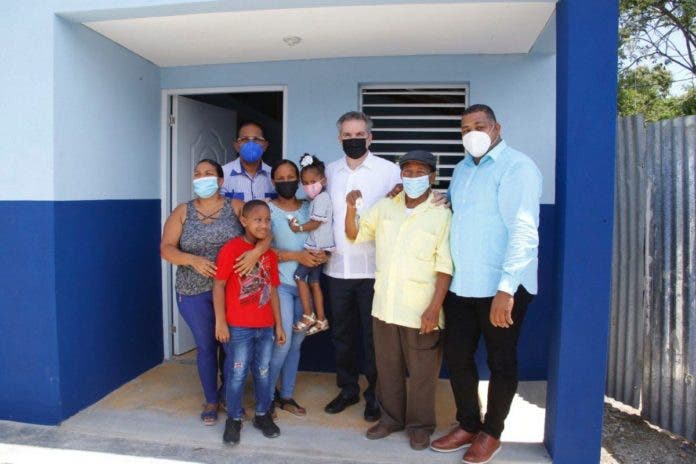 Neney Cabrera highlighted that in less than a year of his tenure at the helm of Propeep, nearly 50 families living in extreme poverty had been benefited.

SAN PEDRO DE MACORÍS, Dominican Republic. – Today, the Government delivered ten houses to an equal number of families living in poverty in the communities of Las Filipinas and Pedro Justo Carrión, as part of the National Program for the Reduction of Extreme Poverty “Quisqueya Digna.”

Minister Neney Cabrera, in charge of Strategic Projects and Special Programs of the Presidency (Propeep), handed over the keys of the ten housing units during a ceremony held at the Municipal Culture Hall. Present there were the mayor, Raymundo Ortíz Díaz; the deputy mayor, María Yolanda Jacobo; Jesús Feris Iglesia, Superintendent of Health and Labor Risks (Sisalril); the deputy, Luis Gómez; and other provincial and municipal authorities.

The official said that the houses are much more than “rods and cement, since they will be a place where the benefited families will shelter their dreams and nest their hopes.”

He emphasized that with this delivery, the commitments made by President Luis Abinader to reduce extreme poverty and improve the quality of life of Dominicans are materialized.

He explained that the favored families were chosen by the community leadership and the municipal mayor’s office of San Pedro de Macorís to guarantee that the neediest would receive them.

“The houses we delivered today are fully furnished and ready to be inhabited by their new owners. And who knows if one of them will become the residence of a future baseball player like the ones that only this province of beautiful sunsets, San Pedro de Macorís, the “Sultana del Este” (Sultan of the East), can provide,” said the official.

Neney Cabrera emphasized that in less than a year of management at the head of Propeep, about 50 families in conditions of extreme poverty have been favored with the delivery of new houses and brought solutions to thousands through the different programs and projects developed by the entity.