Protests in communities of Espaillat and Duarte 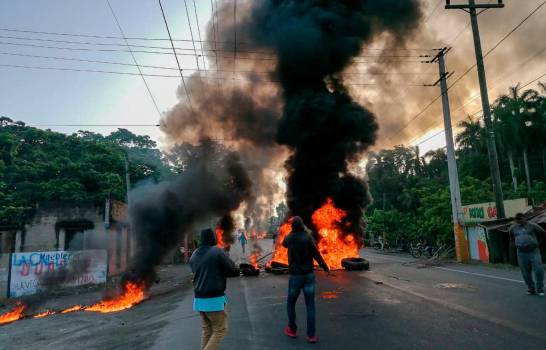 Members of popular organizations protested with the burning of tires in communities in Duarte and Espaillat provinces, demanding the repair of streets and roads.

In the municipal district of Canca la Reina, Espaillat province, demanding from the Ministry of Public Works the continuation of the asphalting works of its roads.

The demonstration arose after a patana of the government institution showed up to remove the asphalting equipment from that town without finishing the work.

Residents of communities such as El Pico, La Chicharra, and Las Canas, among others, are waiting for the paving plan to reach them.

Residents in these rural localities understand that it is an injustice that these types of equipment are taken out of La Reina without completing the work.

In the community of Sabana Rey Abajo, Residents in the municipal district of Cenoví blocked their streets with burning tires and laying debris, demanding that authorities repair the Eladio Romero Santos highway.

In both Cenoví and Canca, the Queen warned that they would continue with the protests until the authorities meet their demands.