Government delivers 1,093 titles to owners of plots, houses and lots in Hato Mayor 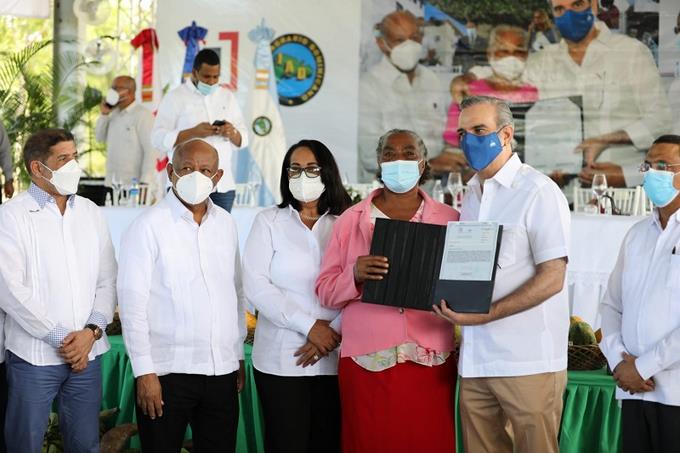 President Luis Abinader handed over 1,93 definitive titles of plots, lots, and houses to inhabitants of the sectors of Los Hatillos, Guayabo Dulce, Buenos Aires, La Bomba, and Barrio Lindo of this province.

The general director of the Dominican Agrarian Institute, Francisco Guillermo García, speaking during the ceremony, said that in the settlements located in these communities and which were favored with titles are produced, in addition to beef cattle and milk, agricultural products such as cassava, banana, auyama, chinola, lemon, orange, tangerine, and other citrus fruits.

He specified that these settlements contribute to the zone’s economy since they produce between 70,000 and 80,000 liters of milk per month, mainly destined to the processing plant belonging to the Cattlemen’s Association of the province. The latter’s products are destined for the School Breakfast in the Eastern Region and the local market.

He said he was confident that with the delivery of these titles, the beneficiaries would be aware that the Government of Change is guaranteeing them peace and tranquility and urged them to use this benefit as an instrument for economic and social development.