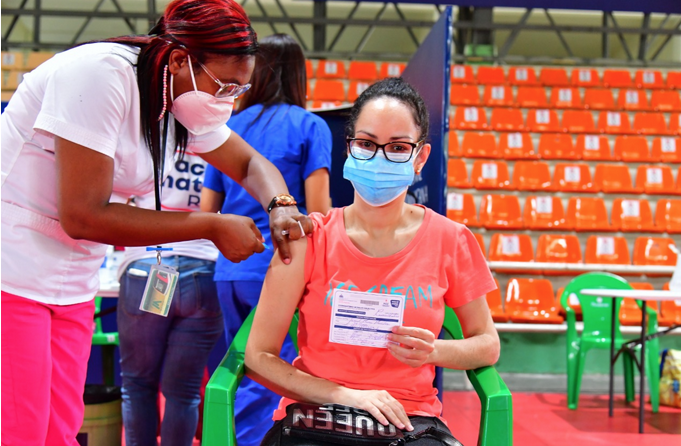 The vaccine is now focused on children and on the second and third doses.

A year after the Dominican Republic began the vaccination program against Covid-19, it has placed over 15 million vaccine doses. However, the initial goal of immunizing 70% of the population with two doses has not yet been achieved.

The vaccination program began on February 16, 2021, seven million people have applied at least one dose of the virus vaccine, and 5.8 have the two-dose schedule.

With three doses, which as of the following Monday becomes part of the main complete vaccine schedule required in the country, the country has just over two million people who have met that requirement.

First vaccinated
The country began vaccination against the Covid-19 virus with health personnel and vulnerable groups, which was later extended to those over 18 and then to those over 12 years. While this week, the vaccination of children from five to 11 years old began, this population line being the last to enter the protection scheme through immunization.

Preliminary data from the National Vaccination Program highlights that as of the 15th of this month, 15,107,392 doses of vaccines against Covid-19 had been applied nationwide. Of this total, the first dose corresponds to 7,043,796 applied, while the second dose, which so far involves the country’s main scheme, the system records 5,844,147 vaccinated.

To date, the population that has received the third dose of the vaccine against the virus totals 2,170,527 people. The Ministry of Public Health has provided by resolution that as of the 21st of this month, the booster dose or third dose will be the complete main scheme.

Vaccination against Covid-19 seeks to reduce contagion levels and protect the population from presenting complications or complex health conditions in case of becoming infected with the virus.

Since the beginning of the program, the country has set itself the goal of reaching at least 70% of the population over 18 years of age, estimated at 7.5 million people, with two doses of the vaccine.

The program began with the vaccination of health personnel at the Ramón de Lara Military Hospital, the first to become a Covid-19 health center in the country for admitting patients with the virus.

DATA
17,000 children vaccinated
Around the school population day, the Vice Minister of Collective Health, Dr. Eladio Pérez, reported that 388 educational centers were included in the vaccination day this week, reaching 17,018 immunized from five to 11 in the first two days years. He said that no report of vaccination-associated events in children of these ages had been received since the start of vaccination.