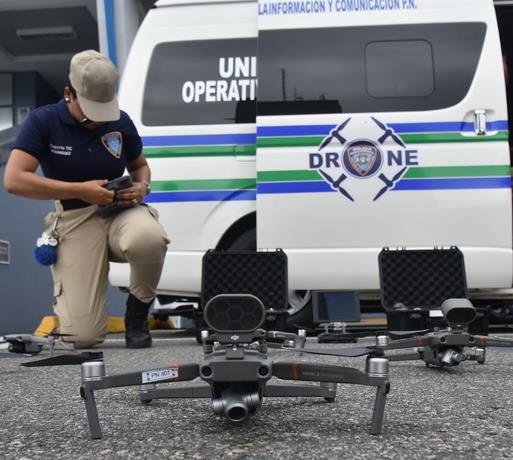 The 18 Police drones have different capabilities on the ground.

Santo Domingo, DR.
With the operation of 18 drones, the National Police is in a better position to fight crime and reduce the levels of insecurity in the country because it can have a more progressive vision of the situation on the ground.

According to what detective Emmanuel Jimenez explained to journalists of Listin Diario, these instruments are part of a pilot plan. They will serve as a guide for the uninformed in special operations.

“We have many unscrupulous people who flee or try to attack the patrols from the rooftops or from the alleys and the agent does not have visual contact; in those cases the drone can go even three kilometers ahead of the perimeter and offer a quick check of the panorama minutes before the agent arrives,” said Jimenez.

On the other hand, the Dominican Association for Police Development president also detailed that these drones could be used in search operations for missing persons or rescues.

“With one of these drones, this work could be expedited,” he added.

Drones characteristics
Without delving into the budgetary cost to the State for the acquisition and maintenance of these devices, Jiménez explained that there are three types of drones, depending on their range. The high-range drones will be able to travel a trajectory of five kilometers and a height of 500 feet, although, in reality, they can fly at a maximum height of 6,000 meters for a time of 31 minutes.

While the medium-range ones have an approximate altitude of 300 to 400 feet and can travel a distance of two to three kilometers.

The team that integrates the mobile tactical surveillance unit demonstrated to reporters of this newspaper how the instruments are manipulated.

According to their indications, the uniformed officer in charge of controlling the control can see, from its screen with 4K resolution, the trajectory followed by the drone and its location and height in real-time.
This control includes a microphone that captures the sound and reproduces it directly on the device as a kind of loudspeaker, thus giving the police the opportunity to provide instructions to the crowd, avoiding “body-to-body” contact with the citizens.

The group of pilots operating since last Thursday, the 18 drones, is composed of about 42 agents who were previously prepared and certified for the task.

“It is a support tool to expand, but it is still in the pilot phase,” clarified the detective.

Distribution
Jimenez also said that the drones are distributed among the National Police Palace, SWAT (Special Weapons and Tactics), Tactical Unit, the Santiago regional, and the Central Directorate of Criminal Investigations (Dicrim).

Security cameras
In addition to this new tactical drone surveillance unit, the PN has had 339 police patrol cars with integrated security cameras for several months.

The spokesman of the military entity, Diego Pesqueira, also emphasized that as part of the actions contemplated for improving police work, at present, some 240 agents perform their services with body cameras. “This will serve to correct bad performances and highlight the good ones (…), many times the citizen denounces a bad behavior of the policeman and vice versa and that generates a point of analysis, then with the cameras they help us with that”, said Pesqueira.

It is part of the Reform.

This Thursday, President Luis Abinader led the launching of a new tactical surveillance unit that will be executed by drones, adding to other measures that have been implemented to contain criminal acts.

This other measure, according to the president, is part of the “reform and modernization of the National Police,” which he described as an “unrenounceable” commitment for which they are making “all possible efforts.”

“The reform of the National Police is also a clamor of the people who deserve to have a professionalized police force, close to the citizens, that watches over the general welfare of the Dominicans at all times,” added Abinader.

They will help as long as they are maintained. Suggest not expect a real dent in crime activities because of the drones. They are a tool and nothing more than that.