Motorcycles with two on board running after 11:00 PM will be detained 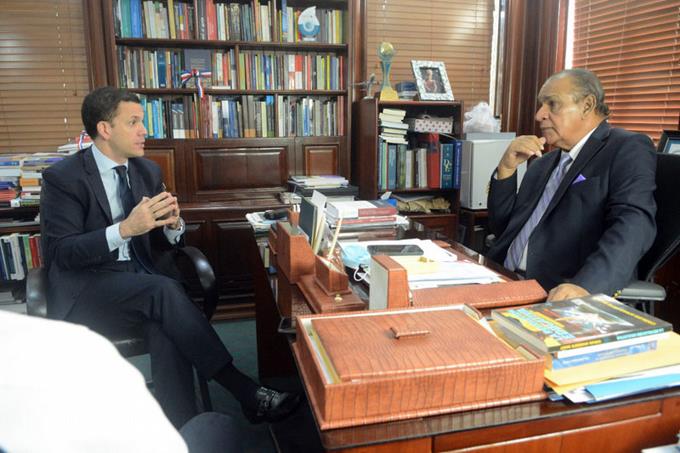 Santo Domingo, DR
The transit of motorcycles with two people on board will be prohibited in the country from 11:00 at night until 5:30 in the morning, according to a resolution to be proposed by the National Institute of Transit and Land Transportation (Intrant).

The insecurity and lack of peace, even affecting mental health, suffered by citizens due to the fear caused by muggers in the streets, seems to have found a light at the end of the tunnel.

The measure suggested by Listin Diario, which proposes to prohibit the circulation of two people on board a motorcycle from 10:00 at night until 6:00 in the morning, and the constant fight against crime and its perpetrators, are finally being taken care of.

During a meeting between Miguel Franjul, director of Listín Diario, and Hugo Beras, director of the National Institute of Transit and Land Transport (Intrant), the head of the governmental entity announced that the directive council of the organization will propose a resolution which will prohibit the transit of motorcycles from 11:00 at night until 5:30 in the morning.

Beras valued the proposal positively and explained that last November, they held a meeting with the associations of motoconchistas and motorcycle importers in collaboration with Jesus Vasquez, Minister of Interior and Police, who is also promoting the initiative, to reach a consensus on the measure.

While explaining that the resolution, in the first stage, would only cover the province of Santo Domingo and the National District, Beras acknowledged the work of Minister Vásquez to achieve this initiative.

He indicated that the control of the drivers and the detention of the vehicles in the retention centers would be the consequences for those who do not comply with the resolution. However, he emphasized that it is not yet defined.

In the same line, in yesterday’s editorial, where he proposes to stop the imports of two-wheeled vehicles, Beras expressed that “to prohibit is never good, to regulate is the right thing to do and what there must be is a good use.”

“For more than 10 years, motorcycles have not paid license plates, a cab driver offers you a transport service and pays for a license plate, but a motorcycle driver does not; this is not fair,” said the official.

The director of Intrant declared that to combat this problem; the government initiated a registration process. Previously, he revealed there were around 15,000 registered motors, and during a 19-month review process, there are currently more than 800,000 two-axle transports in the registry.

After this process, in the next few months, Intrant will announce measures, detailed by the incumbent, which will be implemented so that “the transporters begin to respect and to be afraid of any type of infraction they commit.”

Weeks before, the spokesman of the Ministry of Interior and Police, Ricardo Fortuna, pondered the initiative, which proposes prohibiting the circulation of two people on a motorcycle, in conversation with journalists of this media. He expressed that this proposal of the director of the Listín Diario, Miguel Franjul, “goes in the direction in which a great part of the society has been asking for.”

Fortuna had said that it was important that this measure could be executed; however, he explained that it depends not only on the MIP but also on the organizations in charge of mobility and transport.

They recalled Listín Diario before the Christmas festivities initiated a fight against the motorcycle criminals and the evildoers who generated anxiety among the ordinary citizens.

In another editorial entitled “Machine of death and terror,” Listin Diario exposed the worrying chaos caused by the 2.5 million motorcycles and their drivers, in addition to the fact that 80% of the criminal acts in the country are carried out using these motorized vehicles.

He stated that, in the case of traffic accidents, the disorder produced by motorcyclists is evident. For example, only during the Christmas and New Year’s holidays, 26 of the 35 deaths were attributed to motorcycles, and of 102 accidents, 81 involved these vehicles.

It is an absurd proposed resolution to fight crime. not well thought out. It punishes people who require transport during the late night and early morning hours, times when most general public transport is unavailable, except taxis and public cars. You can bet the restaurants and late entertainment industries will be against this proposed measure.

You can bet there will be criminals pretending to be taxistas who will take advantage of the situation if the proposed resolution is put into effect.

The newspaper would have more credibility of it talked long term solutions – not short term ones involving motorcycles . Banning and limiting motorcycles ? Is the motorcycle business the blame for government not being able to educate the public about rules of the road ? Or not being able to keep tract of licenses etc. How ridiculous . Talk about the real reasons why there is so much crime by addressing why 50% of the population that are the ‘have-nots’ vs the 50% who are the ‘haves’. Why the discrepancy ?