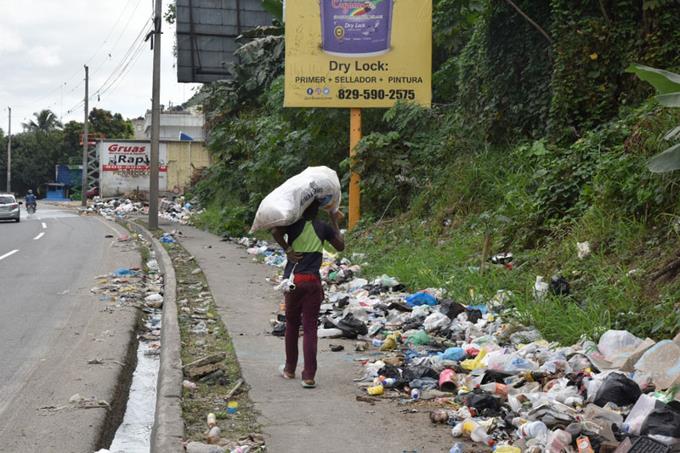 The lack of garbage collection in essential points of Greater Santo Domingo is a problem faced by residents in that neighborhood, who demand more effort from municipalities to keep even the city’s entrances from looking cluttered with waste. During a tour of Santo Domingo Oeste, Santo Domingo Este, and the National District, “improved dumps” were discovered in various sectors, where community members, merchants, and workers in the area dump waste waiting for municipalities to clean it up. There are garbage piles on every corner at Kilometer 9 of the Duarte Highway, where the main bus stops and terminals for Bonao, Santiago, San Francisco, and other Cibao demarcations are located. The Ministry of Public Works’ green stations is also overflowing with solid waste.

According to local merchants and employees, the garbage truck passes through the area every three days, “sometimes every other day,” and Public Works personnel carry out cleaning days that they describe as “deficient,” because they only sweep the streets, sidewalks, and pedestrian bridges. The last one was about 10 days ago, so given the unsanitary and inadequate waste collection system, the merchants in the area must hire employees to clean the streets.

“Every year, they collect it on one day. The garbage trucks may come once or twice a week, and occasionally a commission comes and sweeps up,” a business owner explained. Many merchants complain near the Mara Montez station of the Santo Domingo Metro because, while the truck passes through the area daily, it does so “very late at night,” so the streets are clogged with garbage, representing a source of contamination.

It seems almost evident as long as the streets of politicians are kept clean there is no problem with garbage!!! ¿Is that true?

Garbage has always been a problem government turns a blind eye. Can’t see it, Then, there is no problem.

Garbage collection is obviously a low priority for all levels of government. This is a shame in such a beautiful country. If people had places to deposit garbage the streets wouldn’t look so filthy. This is a health issue that is not being addressed.

again it is management. when they do pick up the garbage they do it dominican style. half ass. they do not pick up and clean up. look at boca chica. what a mess. every street. everywhere there is a filthy mess. it is no surprize americans are no longer visiting here. the first thing they see is filth. the governemt keeps bragging about all the tourist. bull. boca chica is almost closed. no tourest. large hotels closed sitting idle. the thing here is a scam and the average dominican gets ripped off and lied to every day.

Rescue dog on guard for the death of its trainer