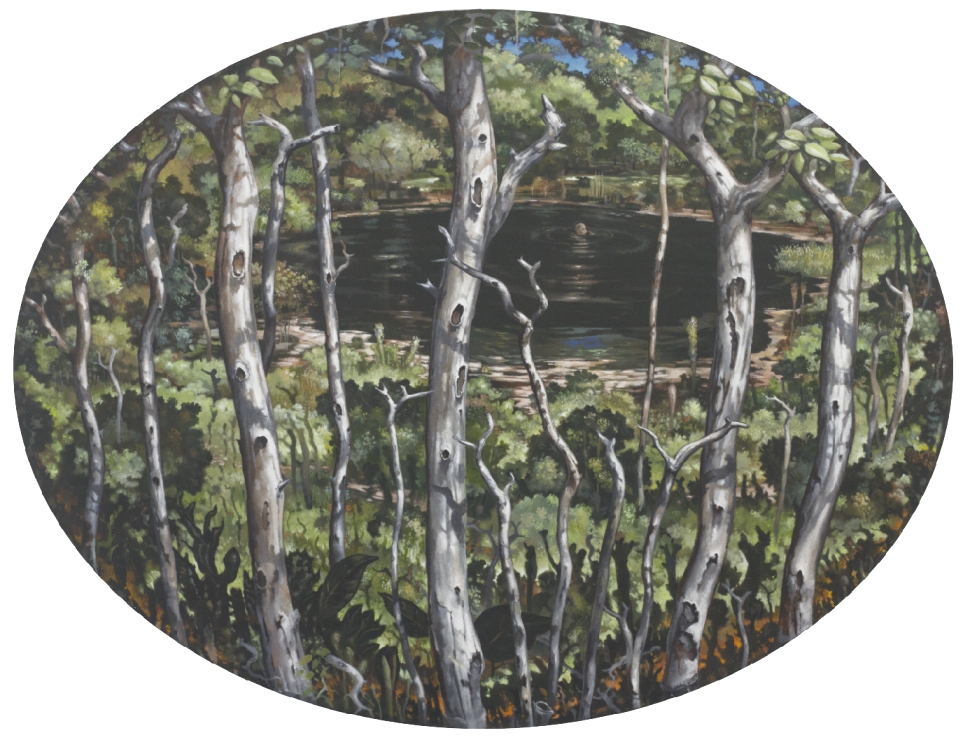 Santo Domingo.- The contemporary art gallery Lyle O. Reitzel , founded in 1995, presents in its main space in Santo Domingo the most recent solo show “Estancias Placenteras” by the controversial dominican artist, Jose Garcia Cordero. The opening will be held on May 4th from 7 PM – 11 PM with the artist’s presence.

“Estancias Placenteras” translates literally to pleasant stays, sends us to a moment of the most pure existentialism in the life of the artist, where the principal nucleus of the body of work that conform the collection have been created under the atlantic atmosphere of his new space and studio, located in Encuentro Beach of Cabarete, Puerto Plata, RD.

Half a dozen of the pieces, have as a protagonist the lonely swimmer, that indomitable mythological character that inhabits the lagoons, rivers and seas in remote corners of the island, “Nothing makes me afraid”, state’s Garcia Cordero from his refugee in “Encuentro”, searching in the Popa savanna, through the dry forests, steril wetlands, inhumane beaches, to just exist. The artist is not a hermit but he wards off from God and men to nurture the profound fiber that allows the sublime.

According to Garcia Cordero “This body of work operates as a registry of being. Wind, the sun, the sea, the white foams, the blue that the water reflects create these works.

The exhibition also includes a series of work in black and white where the artist reveals in a anthropological level the political and social situation of the Dominican Republic and reference our recent history, where corruptions and impunity reign, at the same time he revisits his emblematic child/man of pleasures, in the series “La infancia de Dionisos”. According to the art critic Laura Gil, the present of Dionysus in the work of Cordero deals with the experience of the ego in times of anomia.

As Latin Americans, as Dominicans, as a nation emerged from historical processes of colonialism and posterior independence, constituted through a series of ruptures and discontinuities, that generates in us a cumule of contradictions. During the show works from 2003 will be exhibited.

García Cordero (b. 1951, Santiago, Dominican Republic), studied painting with the Dominican Master Hernández Ortega. In 1977, running away from Balaguer’s dictatorship, he moves to Paris in a voluntary exile, where he studies Contemporary History in the University of Vincennes. During his successful career for over thirty years, he has received multiple recognitions, such as the “Medal of Merit” granted by the Senate of the Republic of France, the “Gold Medal” in the 1st and 3rd Edition of the Caribbean Biennale at Museum of Modern Art in Santo Domingo, among others.

His works have been exhibited in important group and solo shows in galleries, museums, art fairs and institutions in Europe, Asia, Latin America, the Caribbean and the United States.

In 1994, he was part of the “Modern and Contemporary Art of the Dominican Republic,” at the America’s Society of New York and the Bass Museum of Art of Miami Beach, Florida.