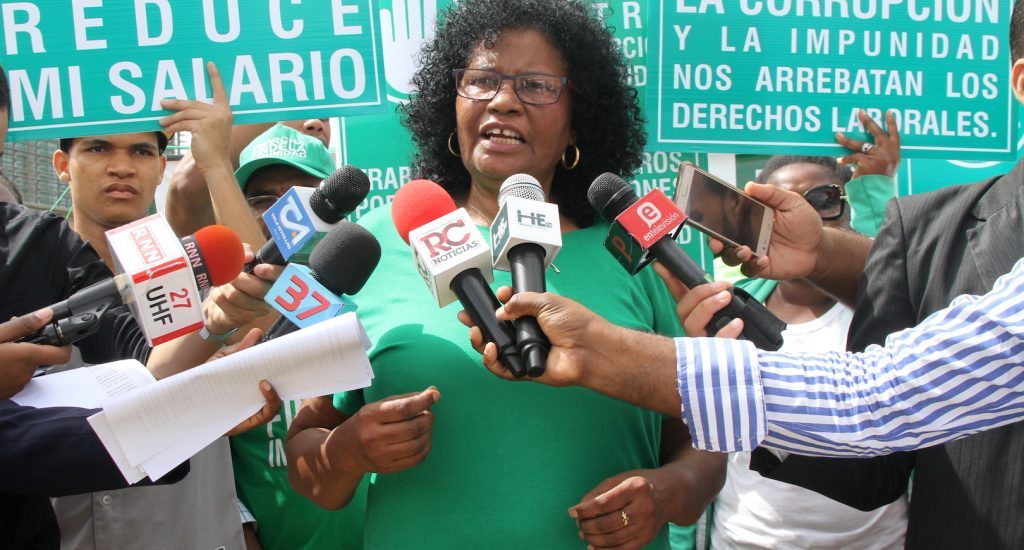 Santo Domingo.- Union leader Eulogia Familia on Tues. warned that corruption and impunity are harming the creation and quality of jobs in the Dominican Republic, because they pose a threat to local and foreign investment and hinder access to decent work for Dominicans.

In a visit to the Green Resistance Camp set up in front of  Congress, the vice president of the trade unions grouped in the CNUS said the justice system, “is manipulated by the corruption of political power curtails the rights of those who generate work, labor rights and citizens to finally lead to economic and social impoverishment in which are already in serious risk.”

Familia said the country’s social inequality is an example of how taxpayer money in the pockets of a cabala of officials depresses wages and debilitates the state budget to meet the social protection which the State must offer workers and their families in health, education, drinking water, social security, the environment and adequate food.

“A sample of the devastation of poverty left by corruption and impunity for workers is the situation that now lives thousands of members of the port and sugarcane sectors, who after having exhausted their productive strength must now make tireless days of fight to be assigned a miserable pension, because the pension funds in which they contributed were snatched by corruption and government impunity,” she said.

The CNUS leader invited all workers across the country to the Voices for the Million Concert, organized by the Green March next Sunday at 5 pm, in front of the Supreme Court, with the participation of popular performers.

Familia also urged Dominicans to actively participate in the March of the Million against Corruption, which will take place on Sunday, August 12 in the capital.

She also asked the entire working class to join and respond to the call, “for the good of your rights and access to decent work.”