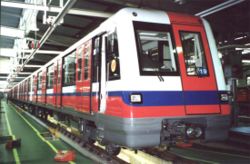 Santo Domingo.- The Transport Reform Office (OPRET) on Thurs. said that the first two of the six cars for the Santo Domingo Metro Line 2B were shipped to the country from the port of Valencia, Spain on Sunday.

It said the Line will be inaugurated in late July or early August, as scheduled.

The cars are expected to arrive at Haina port no later than Jul 25, the OPRET said, and “will proceed to take it under the protocol established to the facilities of the institution, where they will be assembled, inspected and then tested as indicated by the established norms.”

It adds that the 3.3-kilometer line where the new cars will be incorporated, is being cleaned, both the railway and all four stations, to start operating immediately after inauguration.