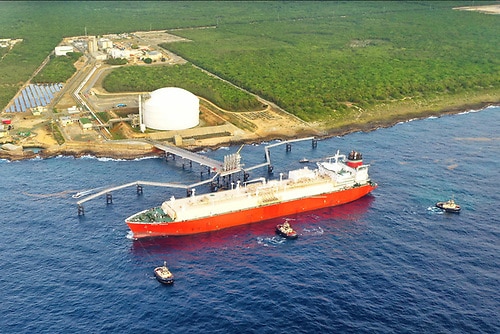 Santo Domingo, Dominican Republic.- AES Andrés, the first Liquid Natural Gas (LNG) terminal in the Dominican Republic, received shipment number 200 from the formal start of its operations 15 years ago, an emblematic event that reaffirms the strategic importance of the entry of this cleaner and more efficient fuel for the Caribbean country with the highest economic growth rate in the region.

This fuel represents savings of 300 million dollars annually for the Dominican Republic, due to the replacement of petroleum-derived fuels, in addition to the direct positive impact on the environment with the reduction of 1,100,000 tons of CO2 emissions per year.

The consumption of natural gas in the Dominican Republic has had a sustained annual growth of 20% from 2003 to date.

“By completing 15 years of operations, the AES Andrés terminal – first in its class in Latin America – has allowed the transformation of the energy matrix in the Dominican Republic, also promoting the development of industry and tourism.”

The British Emerald ship arrived at the AES Andrés terminal on August 10 from Trinidad & Tobago. Since its commissioning, the reception terminal for liquefied natural gas has received 522 Tera BTU of the fuel.

“The experience of having already received 200 LNG ships in the Dominican Republic consolidates us as the leading company in the natural gas market in the region, preparing to repeat this success throughout Central America through the new AES Colón terminal in Panama,” Said Freddy Obando, Vice President of Natural Gas Marketing of AES for Mexico, Central America and the Caribbean.

Edwin De los Santos, president of AES Dominicana reiterated the long-term commitment that AES has in the country, whose investments reach $1.5 billion dollars, and highlighted the contribution of the organization’s human talent that has contributed greatly to achieve this milestone, always working in a professional manner and prioritizing safety for each of the 200 LNG ship reception operations carried out at the AES Andrés terminal,” said the AES executive.

The port infrastructure of AES Andrés has a capacity to receive 10,000 m³ of liquid natural gas per hour and has received in the time it has been operating 183 ships from Trinidad and Tobago, 9 from the United States of America, 3 from Qatar, 2 from Norway and 1 ship from Nigeria, Mexico, and Belgium, respectively and has re-exported volumes to England, Barbados, Panama, and Guyana.

Natural gas has had a direct and indirect impact on many sectors of the economy, but mainly in terms of electricity generation.

The electricity generated using this fuel currently corresponds to 34% of the total electricity delivered to the electrical system of the Caribbean country (enough to supply a million homes on average), thus contributing to the economic and environmental benefits of the use of natural gas replacing liquid fuels.