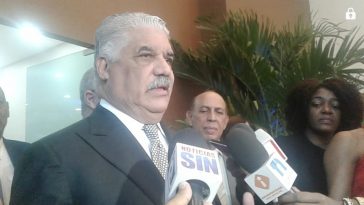 SANTO DOMINGO.- The Minister of Foreign Affairs, Miguel Vargas Maldonado, said he did not know that the ex-consul of the Dominican Republic in Jamaica, Jeremías Jiménez Cruz, trafficked drugs and washed money when he held this position.

He explained that Jiménez Cruz was suspended from his duties in May 2017 and the decree of his appointment repealed in August of that year.

Vargas Maldonado spoke at the end of the presentation of the musical productions “Singing hymns, coral meringues and meringues for the world,” aimed at exalting and promoting indigenous music through the diplomatic missions of the Dominican Republic.

Jiménez Cruz, who chairs the so-called National Christian Movement, was accused in the federal court of Manhattan of conspiring to import cocaine into the United States and to launder money. He was arrested last September 6 and presented the next day before Judge Sarah Netburn.

Prosecutor Geoffrey S. Berman said he allegedly used his high-level role in the Dominican government to traffic large amounts of cocaine to the United States.