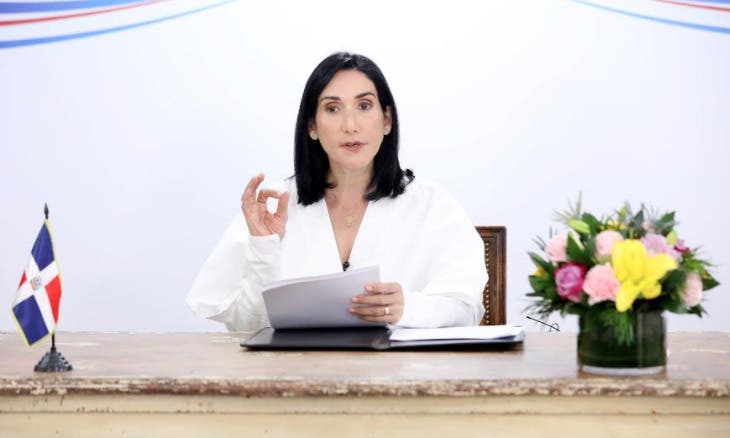 The first lady of the Dominican Republic, Raquel Arbaje de Abinader, appeared today before her counterparts from Latin America at the high-level virtual meeting on positive experiences in the empowerment of rural women, in the context of a pandemic.

The meeting was held within the framework of the #Rural Women, Women with Rights Campaign. This initiative brings together 25 public, private and multilateral organizations and entities–, convened by the Alliance of Spouses of Heads of State and Representatives (ALMA) and the Food and Agriculture Organization of the United Nations (FAO).

In addition to the Dominican first lady, the first lady of Paraguay and general coordinator of ALMA, Silvana Abdo, and the regional representative of FAO for Latin America and the Caribbean, Julio Berdegué, participated in the meeting.

Some of the first ladies presented audiovisuals and reports of the work carried out by their respective governments in favor of rural women, chiefly agricultural, and livestock producers.

The Dominican first lady considered it an honor to participate for the first time in an ALMA meeting, whose objectives express each first lady’s commitment to the present and future of their respective countries and, on this occasion, to rural women in particular.

She explained that just two days ago, President Luis Abinader Corona took office and that enormous challenges marked the circumstances in his inauguration due to the sudden appearance of COVID-19.  The pandemic has aggravated the structural ills that affect the country, punishing the socially and economically disadvantaged population with higher virulence.

“However, we are willing to fight with the best weapons that a government can have: efficiency, justice, equity, transparency, and the prioritization of concrete measures that dignify the lives of the majority,” he said.

She stated that as a Dominican, she aspires to be useful to her compatriots and is willing to work actively for the success of the objectives of President Abinader Corona. Abinader’s government program expressly vindicates peasant women’s economic autonomy and equal rights and recognizes their invaluable contribution in the fight against hunger.

The first lady Arbaje de Abinader reported that in the country, the agricultural labor force of rural women represents 43%.

She expressed that Dominicans unite to work together to ward off the effects of COVID-19 and prevent that, as the FAO representative in the country Rodrigo Castañeda warned just a few days ago, the progress made in the fight against it is lost.

“To prevent this risk, President Abinader Corona announced in his swearing-in speech that Banco Agrícola will have 5 billion pesos, equivalent to some 86 million dollars, for financing at zero interest rate for new planting. It will support marketing and will provide technical assistance to guarantee food safety,” he said.

With this measure, he added, amid the pandemic, 25% of the legally titled peasant women who are sole owners of the productive units directly benefiting from it.

She explained that as new authorities, they would face the pandemic’s challenges and put all their political will to reduce poverty, guarantee food security, and make the rights of rural women effective.

“I warmly greet the rural women, women with rights campaign as an opportunity to articulate and promote regional policies in favor of rural women. However, the recent installation of our government office forces me to take the time to ponder the scope of our participation in this initiative and to identify possible institutional allies,” said Arbaje de Abinader.

While in his presentation, the FAO regional representative for Latin America and the Caribbean reported that the United Nations, through ECLAC, has estimated that extreme poverty in the region will increase by 28 million people.

He considered that if this projection comes true, we will grow by 75 million hungry people, this would take us back 30 years to the 1990s, leaving aside the effort, work, of many governments and social actors.

“Rural poverty is projected to increase this year by 24% and extreme rural poverty by an impressive 42% never seen before. There are 10 million inhabitants who will add to this appalling condition in which income is not enough to get a basic food basket,” added Berdegué.

He said that these figures are not manifest destiny; they are not a game already played; they are projections.

“These figures are a call to action, a call to mobilize all of us in international organizations, civil society, private companies, parliaments or governments to prevent these projections from coming true,” he said.