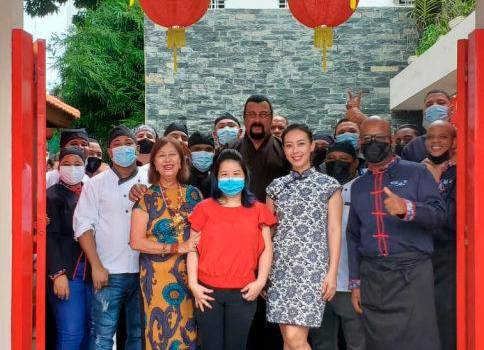 Steven Seagal at the restaurant owned by Rosa NG representing the Chinese community in the country, alongside her and employees of the establishment. (EXTERNAL SOURCE)

Judging by an image that has gone viral on social media, American actor Steven Seagal would be visiting the Dominican Republic. The graphic shows the Hollywood actor with the employees and owners of an Asian food restaurant in Santo Domingo.

According to reports, Seagal, a screenwriter, producer, and martial arts expert, was in the Dominican Republic over the weekend. The restaurant is owned by Rosa NG, a representative of the Chinese community in the country.

The actor has not uploaded the image to his social networks or show signs of his time in the country.

Famous for his action films, Steven Seagal earned the rank of master black belt, seventh dan in the traditional Japanese martial art of aikido, and was also the first Westerner in history to found, open and direct his own school or dōjō of that specialty in Japan itself; the Tenshin Dojo, now run by his ex-wife, also an aikido teacher, Miyako Fujitani.

In addition, he has extensive knowledge of kenjutsu and kendo (styles of classic Japanese fencing) and the disciplines of karate and judo.

Seagal is known in cinema for having a very peculiar, particular, personal, own and rough way of fighting, far from the usual spectacularity in this genre; his is a form based on sharp punches, punches, and linear kicks from traditional Karate in combination with the immobilizations and throws typical of Aikido.

Seagal is also a musician, singer, guitarist, songwriter, and producer, dabbled in blues music: he has released and released two albums and worked helping and assisting the sheriff in Jefferson Parish County in the southern U.S. state of Louisiana.

Steven Seagal is also known for his friendship with current Russian President Vladimir Putin (also a martial artist) and supporting him in his foreign policy.

On November 25, 2016, Seagal received Russian citizenship from President Putin, who granted him his official passport.