Authorities confirm that packages seized in Bayahibe are cocaine 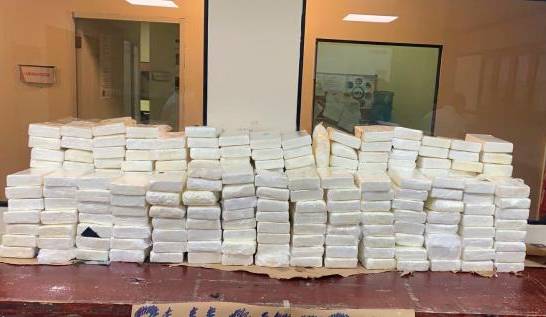 Packages seized in Bayahibe that tested positive for cocaine. (PHOTO BY DNCD)

After carrying out an analysis, the National Drug Control Directorate (DNCD) confirmed that the packages seized inside a speedboat on the coasts of Bayahibe, La Altagracia province, tested positive for cocaine.

It indicated that the examination carried out by the National Institute of Forensic Sciences showed that the packages weighed 283.82 kilograms of cocaine.

Both the National Drug Control Directorate and the Public Prosecutor’s Office indicate that they continue to intensify the investigative process to apprehend and bring to justice the members of this international drug trafficking structure.

According to the DNCD, the anti-narcotics agents and members of the Navy were carrying out maritime patrols when they received an alert that several individuals were trying to introduce an undetermined quantity of controlled substances, “for which reason they mounted an operation along the coastline of the municipal district of Bayahibe.”

The report of the control agency indicates that once the interdiction work began, they located a boat of approximately 28 feet in length, close to the coasts of the beach of Saona Island; they seized 12 sacks containing in their interior 282 packages of the presumed substance.

The Public Prosecutor’s Office and the DNCD have interrogated several persons concerning the case while actively searching for Dominicans and foreigners linked to this criminal structure.

So far this year, the authorities indicate that they have seized more than 24 tons of various drugs, a little more than 31 thousand kilograms of cocaine, marijuana, heroin, crack, and other illicit substances.