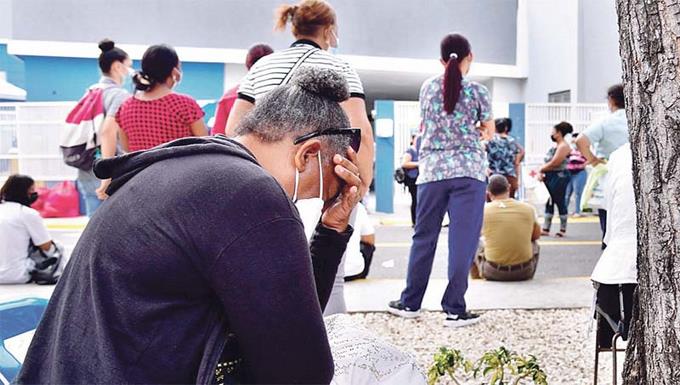 The collection of a large sum of money as a prerequisite for admitting a patient in an emergency is considered a mockery of legal provisions.

The president of the Dominican Medical College (CMD), a former president of that entity and the director of the Robert Reid Cabral Children’s Hospital, do not agree with the collection of advance payment or mandatory deposit of money to enter a private health center for patients, whether or not they are insured.

Senén Caba, president of the Medical College; Waldo Ariel Suero, former president of that union; and Clemente Terrero, director of the Robert Reid Cabral, agreed that care could not be denied to patients whether or not they have money at the time they arrive at a health center.

They favor that the patient, as established by the health protocol, must be stabilized and that, if he is not insured, guaranteeing him, once stabilized, he is taken to another medical center.

Caba disagreed with collecting an advance from the patient and the creation of a fund in case it affects the insured’s capita.

Interviewed for Listín Diario at the end of his participation in a scientific event of the CMD subsidiary, he said that the fund must be paid by the ARS, which he revealed, during the pandemic, obtained profits worth 7,000 million pesos.

While Waldo Ariel Suero, past president of the Medical College, stated that private clinics must provide service to the patient whether or not they have money.

Suero, interviewed before the end of the scientific session of the CMD, a Barahona-Pedernales subsidiary, directed by Dr. Himelda Encarnación Mateo, said that every center must provide the service required by the patient and stabilize him.

The doctor said that once the patient is stabilized if the person facing a health event does not have the corresponding insurance, they should be taken to a public medical center to continue their healing process under all the care and protocols established.

While Clemente Terrero, director of the “Robert Read Cabral” Children’s Hospital, describes as “aberration” the demand for advance payment to the patient by the owners of the private health business.

Last Friday, the General Directorate of Information and Defense of Social Security Affiliates (DIDA) joined the debate generated by complaints from patients about the practice of demanding the payment of advances and deposits for the admission of patients in centers of health about the little humanized treatment they sometimes receive.

The director of the DIDA, Carolina Serrata Méndez, responded to this by warning Health Service Providers (PSS) not to make improper charges to social security affiliates.

In addition, he called on the ARS to comply with the provisions that establish the exclusion of health service providers that affect affiliates from their network.

More opposition
In a press release, the director of the DIDA reminds the providers that they must guarantee them the medical attention contemplated in the legal norms and the resolutions issued by the Superintendence of Health and Labor Risks (SISALRIL).

Faced with Enmanuel Esquea’s proposal to create a fund to guarantee payment to the clinics, the director of Sisalril, Jesús Feris Iglesias, opposed it because it would burden the insured more.

Making a deposit in advance of treatment, especially emergency treatment, is an abuse.