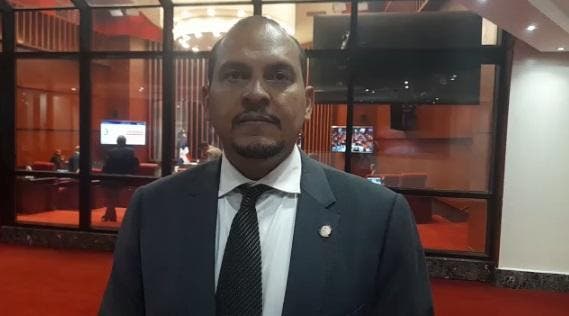 David Sosa, senator for the border province of Dajabón.

The authorities of the Government of the Dominican Republic ceded the Masacre river to the Haitians with the construction of the new perimeter fence; this was revealed to HOY, David Sosa, senator for the border province of Dajabón, who also assured that everything has remained in the first step.

Sosa regretted that after so much commotion caused a few months ago by the construction of a diversion to the Masacre River, by the Haitian authorities, where practically the whole society turned around criticizing the action because it was done unilaterally by the Haitian neighbors, now they have been given the entire critical aquiferous zone, without anyone saying anything.

“For us border residents we are concerned that the work is stopped, but we are more concerned that we fought so hard as a people for the canal and managed to stop it, now we are giving away the river that was the border area,” said the senator for La Fuerza del Pueblo, David Sosa.

Read more: Regarding the construction of the border wall

The congressman considered it outlandish that what always served to separate the Dominican Republic from Haiti, now with the construction of the new wall or fence, the vital tributary is given to the Haitians, amid an absolute silence of all government authorities.

“These are things that we must analyze deeply because I believe that no one is authorized to give away part of the country’s natural resources. We fought for the canal and now we are giving away the river,” said Sosa.

The legislator showed images of how the original dividing edges and the river itself can be seen beyond the fence that officially opened the works last February 20 and which has an initial investment of RD$1,750 million.

BS, what do they want to do? built the wall inside the river? the fence does not “cedes” the river to haiti. Does the totality of the Rio grande belongs to MEX now? not it dosent.

Exaggeration! Mexico will not divert the Grande river to change its course or lower it volumetric flow which is what Haiti plans to do.
By putting a fence on Dominican soil, it gives the Haiti the idea that river is not longer the border and it’s relegated to them. No fence should be put when the river is the border!

This avocado head has nothing better to do?

Let them have it , the river ends in Haiti so it’s only right .

The river is the fence! Abinader has betrayed the 1929 and 1936 border treaties. This fence has to come down and the neighboring country does not have the right to harvest it without DR consultation.
We need to overthrow this democracy and place a nationalistic government who can defend the territorial integrity of DR! NOW!!!