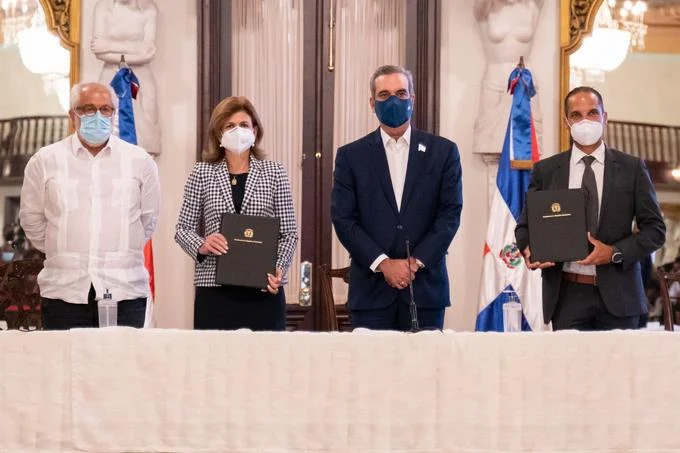 Photograph of the signing of the vaccine purchase contract between AstraZeneca-BioNtech and the Dominican State, in September 2020.

President Luis Abinader warned this Monday that the Dominican Republic would not receive the AstraZeneca vaccines contracted by the state but were not delivered within the agreed deadlines.

“We cannot now accept that they send us all the vaccines at this time because they have vaccines, and they did not send them to us when we needed them,” said the head of state during an interview on the radio program Zol de la Mañana, on Zol 106.5 FM.

Abinader stressed that due to the delays in the delivery of the doses, the agreement with the pharmaceutical company acquires an invalidity characteristic.

“Well, they did not comply, so when you do not comply, the contract is not valid either,” said the government official, while noting that Astrazeneca was delayed and “then later it now wants to deliver all the vaccines at once, and vaccines that are to expire in six months.

Abinader was emphatic that the country could not acquire the drug. And he admitted that the signed contract was given in conditions where “we could not discuss better due to the urgency we had.”

The president assured that he would not affect the national interest, “taking vaccines that we cannot use later,” and that this position had already been communicated to Astrazeneca by the Health Cabinet.

“Either they accept and deliver them to us to the extent that we need them, or there will be arbitration, or we will go to court,” warned the president.

The Health Cabinet announced the contracting of 10 million vaccines with the pharmaceutical company AstraZeneca-BioNtech, for an amount of US$40 million, during the year 2020, this being the first major contract signed by the authorities to obtain the biological for the population.

The contract for the sale of vaccines between the company and the Dominican State indicated that 400,000 doses of the anti-covid vaccine should be delivered to the country on March 21 and 800,000 on April 21, 2021. Unfortunately, neither of the two was fulfilled.

For the third month in a row, in the year 2021, AstraZeneca breached the contract. That third failure was equivalent to another 800,000 inoculations. Two of the 10 million contracted doses should have already been delivered by that date.

The calendar that contains the agreement divides the total of vaccines purchased in a monthly delivery format between March 21 and October 21, 2021.