How many motor vehicles has Digesett retained? 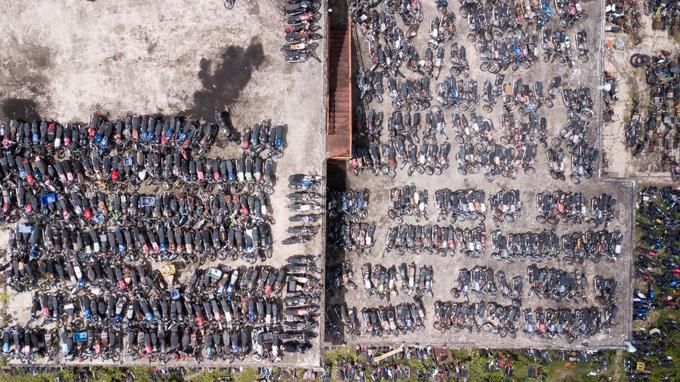 Santo Domingo, DR.
The accumulation of all kinds of means of transport in the facilities of the vehicle retention center or “Canódromo el Coco” is something that one is used to seeing every time one travels along Monumental Avenue.

The passage of time does not show, at least at first glance, that the number of vehicles, engines, as well as any other equipment used for transportation, has decreased.

Nevertheless, the Canódromo el Coco is not the only one that exists. The Dirección General de Seguridad de Tránsito y Transporte Terrestre (Digesett) has five other vehicle retention centers, one of which is exclusively for “junk.”

A document obtained by this media from Digesett indicates, in general terms, that as of 13 April, the institution held 33,585 vehicles which are distributed in 31,292 motorcycles and 2,293 “vehicles,” a period which can be extended to include cars, trucks, and other four-wheeled motorized means of transportation.

Specifically, at the El Coco Racetrack alone there are 22,552 vehicles detained, divided into 21,085 motorcycles and 1,467 other vehicles.

This is followed by the Vehicle Retention Center (CRV) of Villa Mella, where there are 5,226 retentions, divided into 5,128 motorcycles and 98 vehicles.

Then comes the “CRV Chatarra,” a space that Digesett has where they only deposit vehicles that are considered unusable due to the time they have been held without being claimed.

There are 3,074 motorcycles and 585 cars piled up there, occupying a space awaiting a decision on what to do with them, which is the responsibility of the National Institute of Transit and Land Transportation (Intrant).

After these come the CRVs of Independencia, Oriental and Malvella, which between them total 2,005 motorcycles and 143 vehicles detained.

The trend, undoubtedly, corresponds to a greater retention of motorcycles than vehicles.

Beyond the figures, Intrant has the obligation, according to Law 63-17, to publish every month the list of vehicles held in the CRVs.

However, since the creation of Intrant, the action established by law has never been carried out.

Likewise, Intrant has the power to auction the vehicles not removed from the CRVs after 90 days, an act that has not been carried out since its creation, thus promoting the accumulation of scrap metal.